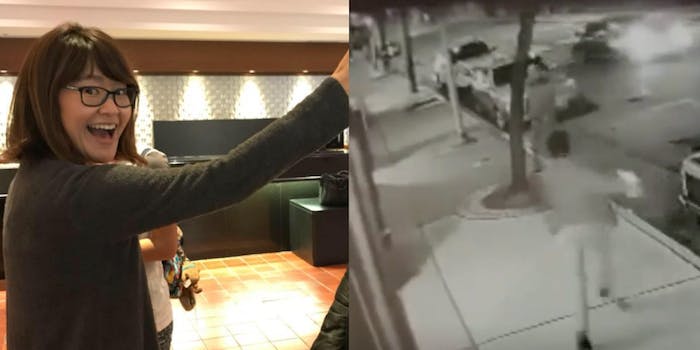 ‘I truly believe he was trying to kill us’: Japanese American teacher and boyfriend attacked while walking

Surveillance video caught an attack on a Japanese American woman and her boyfriend who were allegedly hit with a “hard object” in Seattle’s Chinatown on Feb. 25, the Tacoma News Tribune reports.

Seattle Police Department on Thursday arrested 41-year-old Sean Holdip, who is suspected to have attacked Noriko Nasu and her boyfriend Michael Poffenbarger while they were walking, per the News Tribune.

Nasu, who is a Japanese teacher at Inglemoor High School, says she was hit in the face with “what felt like a rock in a sock,” and she now has trouble speaking after being “knocked out,” NextShark reports. KOMO-TV shared surveillance footage of the incident.

Poffenbarger, who is white, was also hit in the head during the attack and received eight stitches as a result, per NextShark. Poffenbarger said he believes the crime was deliberate.

“I truly believe he was trying to kill us,” he said, according to KOMO-TV. “He hit her so hard (and) he hit me really really hard. I was amazed at how hard he hit my head and it didn’t knock me out.”

Nasu, who did not immediately respond to the Daily Dot’s request for comment, told KOMO-TV she was “dizzy” from her concussion and said the swelling was going down on Thursday.

In a report, the Seattle Police Department said that it is investigating the attack to determine if it is “racially-motivated.”

Northshore Superintendent Michelle Reid, who did not immediately respond to the Daily Dot’s request for comment, said it is “incumbent on all of us to say something” about incidents of hate, KIRO-TV reported.

Poffenbarger said he is “very very happy” that police officers made an arrest, according to KOMO-TV. “I won’t feel like it’s someone I pass or around the corner everywhere I go,” he said. “I hope his arrest will help that stress fade.”

A volunteer with the Chinatown-International District Community Watch group, Tanya Woo, told KOMO-TV that “we still have a lot of work to do.”