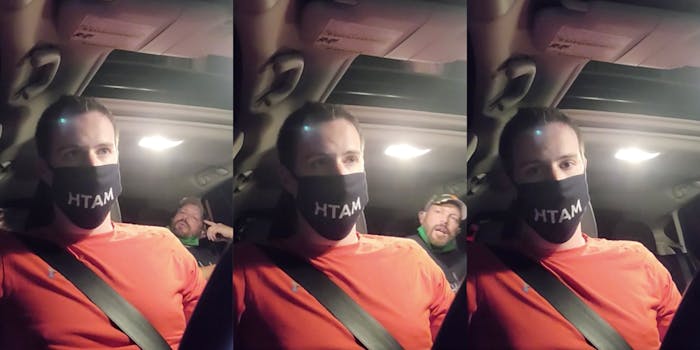 A video that went viral on Reddit on Saturday shows a passenger hurling swear words and homophobic slurs at an Uber driver who said he was voting for Joe Biden in the upcoming presidential election.

“My rider asked who I was voting for,” wrote r/0ForTheHorde, the Reddit user who shared the video. “He did not like that.”

As the video starts, the passenger is telling the driver, “because you’re a little fucking bitch.” Another passenger, a woman, says, “Travis, let’s go.” Travis then goes on a rant filled with homophobic slurs.

“That’s why this world’s gonna become a bunch of pussies because guys like fucking you, you little faggot fuck,” he says. “I’m just gonna tell you that and I have no problems with it. I fought for this country for four fucking years and you little fucking pussies, that’s what’s gonna fuck this world up.”

The driver pulls down his face mask and tells Travis, “Get ready to be banned from Uber for life.” The driver also says he’s going to report Travis and send the video to Uber.

“I don’t give a fuck,” Travis says as he and the woman exit the car. “Go fuck you and your faggot fucks. You’re a little faggot fucking bitch.”

In other posts and comments, r/0ForTheHorde said he picked up the passenger “next to a Trump flag” at 3:45am in Boise, Idaho. “Didn’t think he’d be this bad,” r/0ForTheHorde wrote. The user also said he reported the incident to Uber.

Uber’s community guidelines state that “Any behavior involving violence, sexual misconduct, harassment, discrimination, or illegal activity while using the Uber apps can result in the immediate loss of access to the Uber apps.” The ride-hailing service allows drivers to record rides but prohibits “broadcasting a person’s image, audio, or video recording.”

In a comment, r/0ForTheHorde said he began filming when the passenger said he would “beat the shit out of” him and wanted to record the incident for his own safety. The Reddit user, r/0ForTheHorde, did not immediately respond to the Daily Dot’s request for comment.

Update 2:12pm CT, Oct. 3: In a statement to the Daily Dot, an Uber spokeswoman said the passenger seen in the video has been banned from the app.

“We will not tolerate the derogatory and concerning language used by the rider,” the spokeswoman said. “As soon as we became aware of the incident, we immediately removed the rider’s access to the platform.”