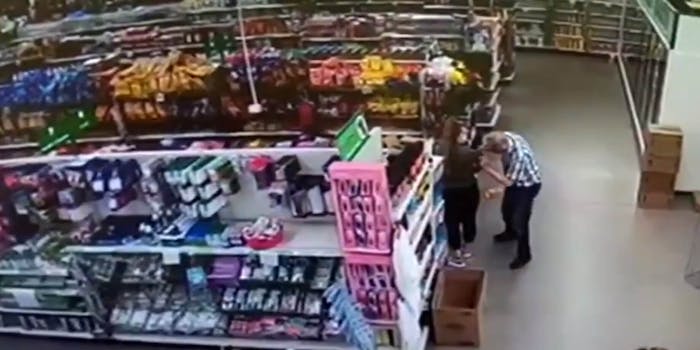 A surveillance camera caught a shopper wiping his nose on an employee’s sleeve after she reminded him about the store’s mandatory mask policy.

The video shows the man walking through the store’s aisles without a mask, defying the state’s executive order requiring patrons in enclosed public spaces to wear one at all times.

As he passes the employee, he then doubles back, walks up to her, and wipes his nose on her right sleeve.

After an initial investigation, police confirmed the interaction was started by the store clerk’s simple request to wear a mask. They added that the man outrageously responded, “Here, I will use this as a mask,” leaving behind bodily fluids as he did it.

The video was released by the Holly Police Department via its Facebook page in hopes that the public could assist with identifying the assailant.

The footage eventually made it to Twitter, where one user urged others to share and relay any information to the police.

“Michigan man wipes his nose on a Dollar Store worker after she asks him to wear a mask. Police said he continued being disruptive and left the store in a van. Come on Tweeps, do your thing and find this asshole. Have information?” they wrote, along with the video, which has been viewed over 70,000 times.

Unfortunately, Michigan had another incident this weekend involving a store dispute over wearing mask.

On Friday, a security guard was shot and killed at a Family Dollar when he asked a customer to wear a face covering.