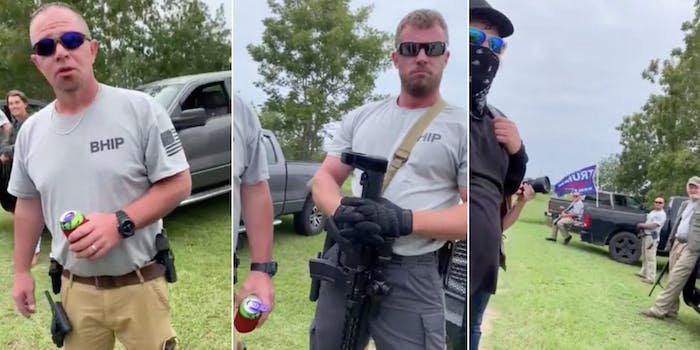 A viral video posted to Reddit over the weekend features a woman verbally eviscerating two alleged veterans and accusing them of lying about their military service.

It is unclear from the altercation whether the two men are actually pretending to be veterans. If they are, then they are perpetuating a growing trend of civilians wearing tactical gear at public gatherings, including political rallies and Black Lives Matter protests.

The video has accumulated over 4,600 upvotes since it was uploaded to r/PublicFreakout on Sunday. It takes place in an anonymous field where a handful of men with pickup trucks and Trump flags have assembled. Most of them are armed, including the two men being grilled by the woman filming the video.

The clip opens with an argument about Immigration and Customs Enforcement (ICE). One of the men asks, “How does ICE go against American values?”

“When was ICE established?” the woman responds before answering her own question: 2003, during the George W. Bush administration.

“You’re right, one of the best presidents we ever had,” the man says.

“You’re a dumbass,” the woman tells him with a mixture of bemusement and anger.

The man continues to defend Bush, explaining that he began his military service during the Clinton administration and received a pay bump when Bush took office.

“Yeah, and then what?” the woman asks “Where’d he send you? Nowhere? Did you go to Iraq? Afghanistan? Anywhere?”

“I damn sure did,” the man responds, neglecting to give a specific answer about the location of his service.

Continuing to deflect the question, the other man being interrogated responds with, “Why don’t y’all immigrate to another country and see how that works out for you, illegally?”

The woman filming the confrontation finally calls the men out point-blank.

“You didn’t deploy, that’s the funny part,” she says. “You’re out here and you’re like, ‘Oh, I’m a veteran.’ No one gives a shit, dude. I’m a veteran. We have so many veterans with us. You know why? Because we care about people. We’re not out here fucking licking boots.”

Commenters on Reddit were split on whether the two men in the video were actually veterans, but the user who originally posted the video, u/CantStopPoppin, was not convinced.

“They are obviously pretending to be Military Service members and there is something wrong with that,” the user said.

“My father was in the Air-force he can tell me where he was deployed and where, his DOD # and rank without any thought process,” they continued. “Answering any of these questions would have immediately resolved the women’s suspicion of stolen valor. Instead these men were clearly attempting to avoid the question by telling her to go to another country.”