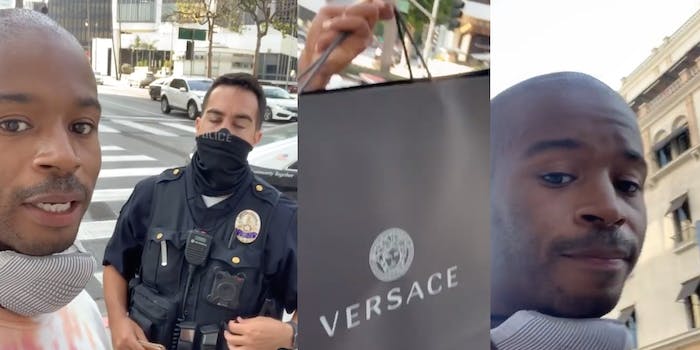 He was walking out of a Versace store.

A Versace vice president said he was racially profiled by Los Angeles police after leaving the luxury store he works for with shopping bags in hand.

Salehe Bembury, vice president of Versace sneaker’s and men’s footwear, shared a recording of the incident on Instagram.

“So I’m in Beverly Hills right now and I’m getting fucking searched for shopping at the store I work for and just being Black,” Bembury says in the video.

One of the officers says he’s making the situation “completely different” than what was happening.

“So you checked my ID. Do I have anything on my record?” Bembury asks one of the officers.

“No, you’re good to go sir,” the other officer says.

In an Instagram Live video, Bembury said the officers pulled up on him as he was walking, which understandably startled him, but he played it calm because “I’m doing nothing wrong.” They jumped out of their car and said he’d jaywalked, patted him down, took his phone, and told Bembury not to reach into his pockets.

“I’m safe and I’m good, but it’s fucked because I was doing nothing wrong, casually walking down the street with just a big ass Versace bag,” Bembury said.

Donatella Versace, chief creative officer of the label founded by brother Gianni, said on Instagram she was “appalled” at what happened to Bembury.

“He has been a consultant at Versace for a long time and the behavior he experienced is totally unacceptable,” Versace wrote. “He was stopped on the street solely for the color of his skin.”