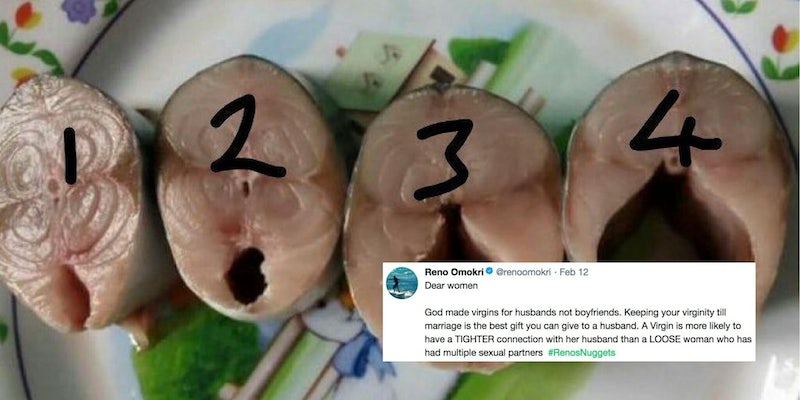 Can someone please tell this man that the vagina is not like a rotting piece of tuna?

This isn't a sex education lesson, but a cautionary tale not to f**k rotting fish.

If there’s anyone who knows what bad sex education looks and sounds like, it’s me. Growing up in Texas, one of 11 states that don’t mandate sex education but does mandate stressing abstinence when it is taught, I remember: learning the anatomic basics of reproductive systems (because sex was strictly for reproduction); being told that the only way to 100 percent not get pregnant or contract sexually transmitted diseases was to not have sex; and that I needed to protect my reputation as a “moral” woman.

In other words, the state wanted teens to know that you shouldn’t have sex out of wedlock and that you should feel shame if you decide to do otherwise. Which, you know, doesn’t stop teens from having sex—it just means they’re going to be poorly informed about the sex they are having, feel bad about having said sex, and be reluctant to bring up sexual health issues with people they should be able to trust.

Yes, someone deliberately fingered four fish steaks in an effort to show women what they too will experience if they have sex with up to four different partners.

“God made virgins for husbands not boyfriends,” author Reno Omokri writes in the post, blasting women who have pre-marital sex. “A Virgin is more likely to have a TIGHTER connection with her husband than a LOOSE woman who has had multiple sexual partners.”

It’s unclear which argument is more infuriating: the idea that a woman’s vagina is purely purposed for male satisfaction; the concept of virginity being an indicator of a woman’s worth to another person, let alone herself; or the completely wrong assertion that the vagina is some poor fish filet that permanently widens with each penis it encounters (never mind the existence of anyone other than cis, heterosexual women!).

Sure, Reno, you can try defending your outdated religious constructs of feminine virtue and a woman’s “responsibility” to remain “pure” and “chaste” for a man who she is supposed to marry. But asserting that the vagina loses its elasticity between sexual partners is just lazy peddling of a long-debunked sex myth, a willful ignorance of something so easily verifiable that it’s almost laughable.

Oh honey. That's not how a vagina works. I have my actual degree in the Bible and a degree in Theology and I still bothered to learn about female anatomy.
Vaginas are MADE to stretch, for babies. But the pelvic floor has muscles. Do kegels and you stay tight.

Like I am so concerned that you are putting this out there and now women are not going to want to be with you because you do not even know basic female anatomy…you can find this stuff out without stumbling.
And you should! You should know about female anatomy! For love's sake!

You literally have a book called "Facts VS Fiction" but you are spreading a literal lie right now. Vaginas are elastic so that someone with a vagina can give birth and have their entire vagina stretched open for a baby and still heal and come back from it.
Or do you disagree?

Do you believe that women who've carried out the charge to populate the earth are unable to ever have set with their husband after they give birth?
Because their vagina stays a gaping huge hole that fits an entire child?
I need you to answer me because I am literally so worried!

For fact, the vagina doesn‘t turn into a cavernous, insatiable monster with each foreign object it encounters—the vagina is made of tightly-folded, elastic tissue that actually expands when someone is aroused and allows the vagina to contract back to its natural shape after sex, every time, no matter how many times someone has sex. A lot of sex will not “loosen” the vagina.

A lot of sex will not loosen the vagina.

It’s at least comforting to see that, across Twitter, people who know better have absolutely grilled Reno and his rotting fish-based vaginas for asserting such an obvious falsity.

the vagina is very elastic, it expands & contracts so it goes back to being tight after sex. it can loosen thru aging or giving birth; it’s not always about how much sex a woman has had so please stop judging women gratingly just because of the size of their genitalia https://t.co/t86odjO0GT

Dear Christian Men,
You made virginity for husbands' ego. Keeping your controlling behavior & slut shaming out of your marriage is the best gift you can give to a spouse. A partner's sexual history has no impact on their anatomical size or relationship depth. #PenisInsecurities https://t.co/CWfYLC39wi

1. You marry a person for who they are, not for their virginity.
2. How can u be an author and not know that the vagina is a muscle. It can stretch to allow a baby to pass through it.
3. Did you gift your virginity to your wife? If not then sit the fuck down and shut the fuck up. https://t.co/9rcIj42K77

And to be sure, there’s an element of curiosity that comes with reading Reno’s post about vaginas—how exactly did he widen the holes in those poor fish steaks to make his point?

2) Marry someone who you trust, love, laugh and have great sex with, and don't worry about anything else

3) Did this guy fuck those pieces of tuna? https://t.co/WeXIbbDaGW

Dude. Pretty sure God wants you to stop fucking the fish. https://t.co/tTq8drzqsT

Dear Reno. Vaginas are different to tuna steaks. I suggest you stop having sex with the latter and respect the former. https://t.co/tGkIM3vXCt

why this dude fucking tuna steaks though https://t.co/HJdl9VY6bc

Did… did he fuck salmon filets? Is that what I'm supposed to be getting? https://t.co/GNQHqqNYQD

Honestly, though—how does this man think having sex as a married person works? Do you just have sex four times, and then you’re widened beyond repair?

Remember ladies, after you get married you can only have sex 4 times! https://t.co/JuvCqLKHeq

If there’s any lesson a clueless, sex education-deprived teen can learn from this man’s misguided post, it’s that you most definitely don’t want to ruin the magic of sex by sticking your penis into a dead fish, because the internet will definitely see through your slut-shaming facade and drag you for it. (As if the coconut lesson wasn’t enough of a cautionary tale.)