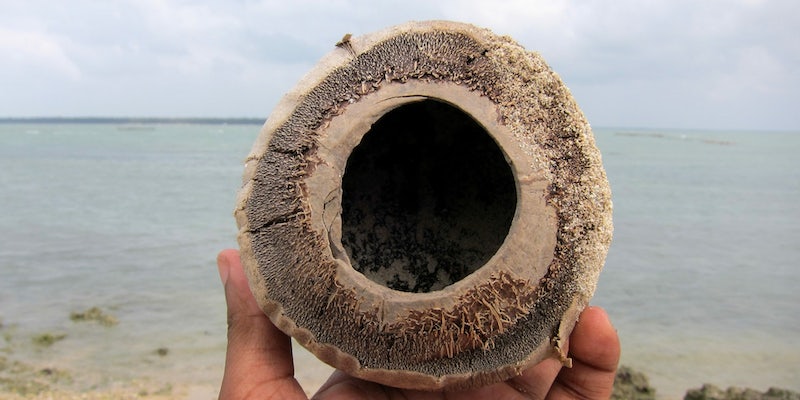 Even for a story about a man having sex with a fruit, this is pretty bad.

It’s hard to be shocked by anything on the Internet these days… or so you might think. Anytime the world starts to feel desensitized to the horror show that is the online community, a  villain arises to show us how wrong we are.

I end up grabbing the coconut drill and through 20ish minutes of concerted effort end up creating a hole large enough for me to stick my porker into. I decide it requires some lube and grab the nearest slippery thing (some butter) before shoving it into the coconut followed shortly by my meat. I fuck the coconut and it actually feels pretty damn good so I blow my load, shove the coconut under my bed and continue about my day.

Right now you’re probably thinking “Oh come on, I’ve heard about worse stuff on the radio, and that was in the ’90s” But read on… if you dare.

For the next week the coconut is my saviour. Whenever I want to get off I simply take it out and fuck it in its delightfully tight hole made better each time by accumulating volumes of my semen and butter acting as a lubricant. It’s heaven.

Okay, now that dude is legitimately gross. Every man reading this story put his penis someplace… questionable in his youth. But you throw the thing out afterward! You don’t keep it around for repeated use! NOTE: That is not a metaphor for one-night stands, please treat your partners respectfully.

Okay clearly things are already off the rails, but things only get worse from there.

About a week and a bit after the initial coconut fuck (I had been using it pretty much every day since then) I begin to notice a few more flies than usual as well as an odd, unpleasant smell about my room. Must be the coconut right? So I decide that I’ll fuck it once more before I throw it out and get a new one.

What?! No! Everything about that paragraph is wrong. You go to hell, dude. You go straight to hell.

The more scientific among you might know what’s about to happen, for the rest of you, just… I don’t know, go ahead and read this if you want, just don’t say you haven’t been warned.

You see, the reason for the increased number of flies was that the coconut was evidently, in hindsight, a nearly perfect place to lay eggs. As I penetrate the coconut one last time I begin to feel a strange wriggling sensation. Puzzled, I pull my cock out to discover that it is COVERED in rotted and moldy butter and semen and TEEMING WITH TINY FUCKING MAGGOTS. They were wriggling all over my dick head and some were even trying to force their way up into my urethra.

I screamed, and threw the coconut against the wall which made the situation worse by spilling the contents.

We are so, so, sorry. Here’s a baby playing with a kitten. Everything will be fine.

For those of you who can’t get enough of this story, you can now read this dude’s AMA (Ask Me Anything) on Reddit. Maybe ask him how he sleeps at night knowing the rest of us can’t now.