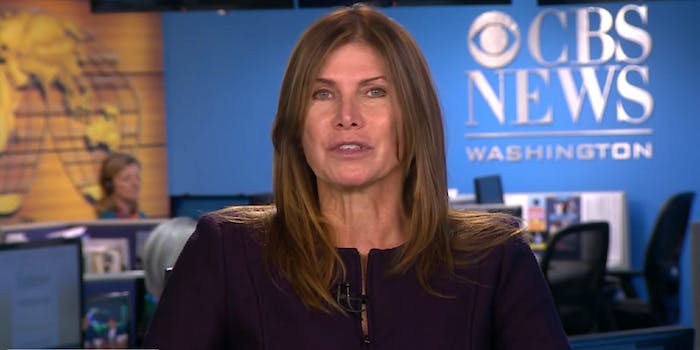 Mary Bono had attacked the Nike-Colin Kaepernick ad in an unearthed tweet.

USA Gymnastics is looking for yet another interim president after its last pick, former Republican U.S. Representative Mary Bono, resigned amid a controversial tweet attacking both Nike and NFL free agent Colin Kaepernick.

The controversy began after Twitter users discovered a now-deleted tweet from Bono on Sept. 7, in which she posted a photo of her blacking out the Nike logo on her sneakers before playing in a golf tournament—a gesture to condemn the company for supporting Kaepernick’s protests against racial injustice.

“Playing in a charity golf tournament raising money for our nation’s Special Forces operators and their families,” Bono tweeted. “Unfortunately had these shoes in my bag. Luckily I had a marker in my bag too…” By the time the tweet was deleted, it was heavily ratioed, with over 2,000 replies against just 67 retweets and 225 favorites, according to one screencap.

24 hours after being named interim president of USA gymnastics, a Mary Bono tweet from last month surfaced of her sharpieing the Nike check in response to Colin Kaepernick’s deal with Nike, because she’s a ridiculous person. pic.twitter.com/BeHTASlv6s

Bono was hired as a replacement for USA Gymnastics president and CEO Kerry Perry, who departed from the organization in light of the Larry Nassar sexual abuse scandal that impacted over 200 women in Nassar’s care. Bono was supposed to start a new chapter for the organization, but her tweet suggests she wasn’t ready to leave behind divisive rhetoric that would alienate the very athletes she was hired to serve.

Simone Biles and Aly Raisman, two USA Gymnastics gold medalists who were impacted by Nassar’s abuse, came out against Bono shortly after the tweet surfaced, with Biles using the phrase “*mouth drop*” to describe the interim president’s tweet.

“Don’t worry, it’s not like we needed a smarter USA gymnastics president or any sponsors or anything,” Biles tweeted, bringing Bono’s photo to a wider audience.

Two days later, Raisman revealed that Bono was connected to the Faegre Baker Daniels law firm, which the US Olympic Committee retained in order to “cover up our abuse,” she alleges. In May 2018, email transcripts reportedly revealed that a Faegre Baker Daniels attorney participated in a cover up to protect Nassar from suspicion while he was under investigation for sexually abusing his patients, according to a report from The Indianapolis Star.

“My teammates and I reported Nassar’s abuse to USAG in 2015. We now know USOC and lawyers at Faegre Baker Daniels (Mary Bono’s firm) were also told then, yet Nassar continued to abuse children for 13 months!?” Raisman tweeted. “Why hire someone associated with the firm that helped cover up our abuse?”

don’t worry, it’s not like we needed a smarter usa gymnastics president or any sponsors or anything https://t.co/cYQizcjywn

My teammates & I reported Nassar's abuse to USAG in 2015. We now know USOC & lawyers at Faegre Baker Daniels (Mary Bono's firm) were also told then, yet Nassar continued to abuse children for 13 months!? Why hire someone associated with the firm that helped cover up our abuse?

At first, Bono said that she experienced “regret” over the Nike tweet and vowed to “respect everyone’s views and fundamental right to express them.” But after her resignation, Bono lashed out against her critics, claiming that her departure “comes in the wake of personal attacks.”

“With respect to Mr. Kaepernick, he nationally exercised his first amendment right to kneel,” Bono tweeted in her response. “I exercised mine: to mark over on my own golf shoes, the logo of the company sponsoring him for ‘believing in something even if it means sacrificing everything’—while at a tournament for families who have lost a member of the armed services (including my brother-in-law, a Navy SEAL) who literally ‘sacrificed everything.'”

In her resignation tweet, she also stressed that she too “witnessed first-hand the assaulting behavior of a coach” and “watched peers who acquiesced in it move ahead while those who didn’t were left behind, and myself stayed silent,” something she calls “very troubling to me to this day.”

“I would have brought a fire in the belly to ensure that no one as taken with gymnastics as I was at that age should have to choose between abuse and ambition, or between properly speaking out and promoting personal success,” she wrote.

Here is the statement I released earlier today regarding my resignation from USA Gymnastics pic.twitter.com/Oqga5FTXvx

While horrific, Bono’s personal experience with assault doesn’t validate any complicity in a law firm that covered up Nassar’s sexual abuse. Nor does it excuse her tweet against Nike and Kaepernick. To that extent, Raisman turned to Twitter once more and criticized “another poor hire” and “familiar statements.” But Raisman also said she was “truly sorry” for Bono’s experiences in gymnastics, stressing that her objection to her hiring “was not personal.”

“The stakes are high in our sport right now,” Raisman tweeted, “and it’s essential new leadership be disconnected from the influences that allowed these terrible things to happen.”

Ms Bono, I’m truly sorry for what you experienced in the sport. Please know, my objection to your hiring was not personal. The stakes are high in our sport right now, & it’s essential new leadership be disconnected from the influences that allowed these terrible things to happen.

The Olympic family fails us again. Another poor hire + familiar statements. Don't worry, USAG/USOC will search for the right leader…again. Meanwhile, gymnasts prepare for World Championships during another organizational leadership crisis. But hey, athletes are the top priority.