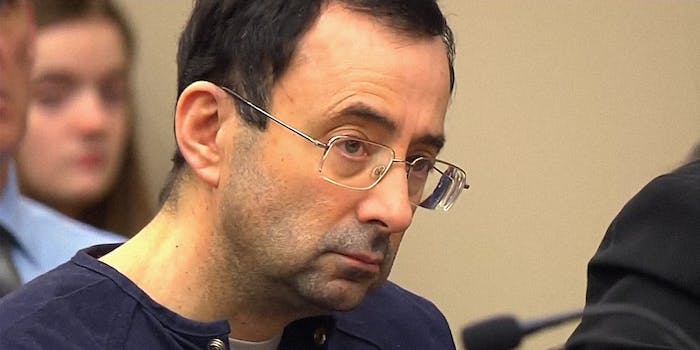 'I just signed your death warrant,' the judge said.

In a moving statement in which Judge Rosemarie Aquilina stood in solidarity with the 150-plus women who survived his abuse, former USA Gymnastics doctor Larry Nassar was sentenced to a minimum 40 years and up to 175 years in prison.

“It is my honor to sentence you because, sir, you do not deserve to walk outside of a prison ever again,” Aquilina said according to a livestream from CNN. “Anywhere you walk, destruction would occur to those most vulnerable… I just signed your death warrant.”

Aquilina refused to publish a letter from Nassar regarding the court case, warning that his voice may revictimize his victims. Instead, she read part of the letter out loud to reveal a man continuously defensive against his charges and who argued that his sexual abuse was part of “medical” exams.

She proceeded to criticize Nassar, claiming that he “did not yet own what he did” and that she “wouldn’t send my dogs to you.”

“It was not treatment, what you did,” Aquilina said. “It was not medical. There is no medical evidence that was ever brought.”

Rachel Denhollander, who helped launch the original investigation, spoke out against Nassar after the sentencing. Denhollander says she was sexually abused by Nassar when she was 15, after visiting him for treatment for chronic back pain.

“I can speak the truth about abuse without minimization, or mitigation, and I can call it evil, because I know what goodness is,” Denhollander said. “And this is why I pity you.”

“It’s the biggest sexual assault scandal issue in history,” Denhollander also said, “and we should want to know why it happened. And if we don’t, it’s not going to get better.”

Nassar had been on the medical staff of USA Gymnastics since the 1980s and also ran a clinic and gymnastics organization at Michigan State University. Sexual abuse allegations have followed Nassar throughout his career, but it wasn’t until Denhollander filed a lawsuit in 2016 that a wave of women came forward—over 150 total—saying Nassar sexually assaulted them.

Survivors said he used his position as a doctor to sexually abuse and assault his female patients, ranging from child athletes to adult women. Multiple accusations were levied against Nassar by several prominent U.S. Olympic stars as well, including gymnasts Gabby Douglas, Jordyn Wieber, Aly Raisman, and McKayla Maroney.

“Larry, you do realize now that we—this fearless group of women—you so heartlessly abused over such a long period of time are now a force and you are nothing,” Raisman told Nassar in a testimony from last week. “The tables have turned, Larry, and we are here, we have our voices, and we are not going anywhere.”

Maroney has since filed a lawsuit against the U.S. Olympic Committee, claiming that the committee knew about Nassar’s child molestation allegations and hid Nassar’s behavior from the public, including the U.S. Senate. Maroney’s suit claims she was also forced to sign a $1.25 million confidential settlement with USA Gymnastics, arguing that non-disclosure and non-disparagement clauses part of the settlement may not be legal.