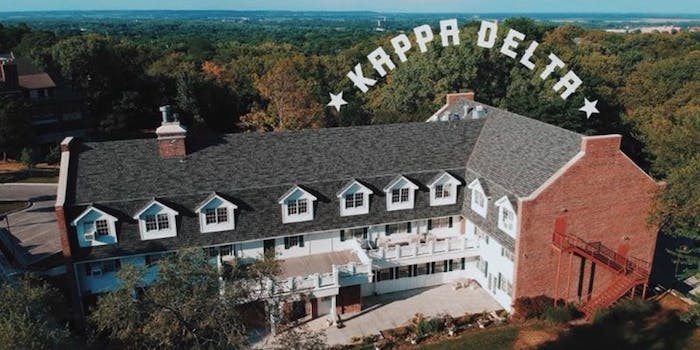 The Kappa Delta president at the University of Kansas was removed from her position.

A University of Kansas sorority president has been removed from her position after a video caught her and at least one other woman spewing anti-Asian comments.

The video doesn’t show the women’s faces, but they can be heard talking. The clip was posted on Instagram account @stripyourletters, which according to its profile aims to decolonize the National Panhellenic Conference and make the organization “safer for ALL women.”

The Instagram account began calling organizations at the University of Kansas in July, demanding the organizations acknowledge their “role as an oppressive system within secondary education.”

On Friday, the account posted a transcription of a conversation alongside a 34-second clip.

The video appears to have been recorded in secret and shows only a view of a towel and a door handle. In the background, two women are heard laughing and talking.

“What if she’s from fucking Beijing, I dont know where the fuck she even came from but I’m nervous as shit,” says the woman identified by the University Daily Kansan as Maddie Hissong, a Kansas University senior and vice president of membership for Kappa Delta’s Zeta Epsilon chapter.

The video was taken in February when anti-Asian sentiments were on the rise as the coronavirus, which started in China, began to spread globally.

In the clip, one person brings up her Asian dentists. “They’re all fucking Asian people,” she says.

“All Asians…all asians!” says another person.

One woman, identified by the Kansan as the sorority’s President Jackie Hitt, brings up her fromer dentists, an Asian couple, and says “they all talked like that.”

“But I don’t know if you notice,” says one woman before her voice trails off into an inaudible whisper.

“She picks at my teeth with that fucking picker so aggressively my fucking gums start bleeding,” says another.

On Sunday, Hitt apologized in a statement to the chapter but has not made any public comments.

“I want to immediately come out and say that I own the things I said; I will not deny that I said them and I am sorry,” Hitt said in the statement, published by the Kansan. “I know that those words were wrong, I know that they were hurtful and I know that they have caused pain that I will never be able to comprehend.”

Following the release of the video, Kappa Delta said in a statement on Monday that one woman was removed from her position, and two had stepped down.