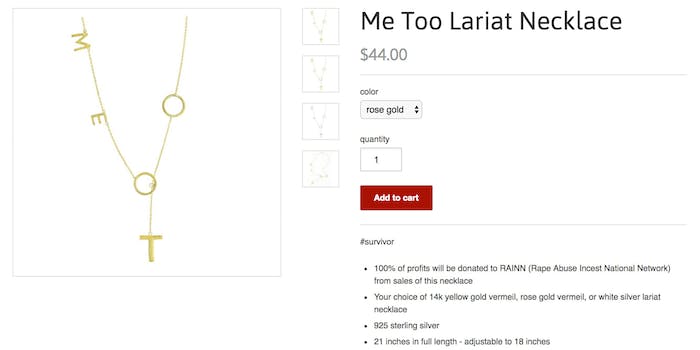 Is it the commodification of trauma or a tool of empowerment?

A necklace bearing the words “Me Too” unleashed the frustration of many Twitter users Wednesday, but the creator behind the necklace—based on the viral #MeToo used by sexual harassment and assault survivors—defended her design.

Julie Gerstein, who is the senior lifestyle editor for BuzzFeed News, first called attention the necklace, saying it was a “complete and utter reprehensible cooptation of feminist causes.”

Today in the complete and utter reprehensible cooptation of feminist causes, a brand is selling a "ME TOO" necklace. FUCKING HELL. pic.twitter.com/HlXHuhsgF7

The necklace was posted to jewelry company Adornia’s website Wednesday morning, with the description originally explaining that 10 percent of sales from the necklace would be donated to the Rape Abuse Incest National Network (RAINN).

But as Twitter users pointed out, in just a few hours, after the backlash started rolling in, Adornia changed the percentage of profits going to the organization from 10 to 100.

Still, the necklace seemed to some to be a commodification of women’s struggles and traumas, including assault.

the ME TOO necklace is apparently the perfect gift for any lovely lady in your life!!!!!! pic.twitter.com/Q7u2r4Evbj

The owner of Adornia and the designer of the “Me Too” necklace, Moran Amir, told the Daily Dot that exploiting women’s pain was not her intention, as she was a victim of sexual abuse at age 11.

“It felt natural for me to want to expand my line to include this necklace and cover women who are finding comfort in sharing their #MeToo stories,” Amir wrote in an email.

Of the jewelry with similar designs in Amir’s collection, there are necklaces that say “woke,” “gay,” “nasty” and “fake news.”

“‘Me Too’ I was particularly passionate about and felt relevant for this moment in time,” Amir said.

As for the sudden change in how much profit would go to RAINN, Amir said her company picks a different charity “focused on female justice” each month to which 10 percent of profits is donated.

“I was not thinking when I just applied this same model to the ‘Me Too’ necklace,” Amir said. “I can see how it can get misconstrued. I don’t want to profit off of people’s pain.”

She said she is “100 percent devoted to the cause and didn’t want any conflict” so she “decided to donate 100 percent” to the organization.

“I am a female artisan who is personally connected to the issue and have designed a tool to empower women and connect our similar survivor stories,” Amir said.

The #MeToo hashtag proliferated on Facebook and Twitter this week, with women all over the world sharing their stories of sexual harassment and assault to demonstrate just how widespread sexual harm against women really is. This was after a flood of sexual assault and harassment allegations against Harvey Weinstein dominated the news and prompted discussions about sexual abuse on social media.