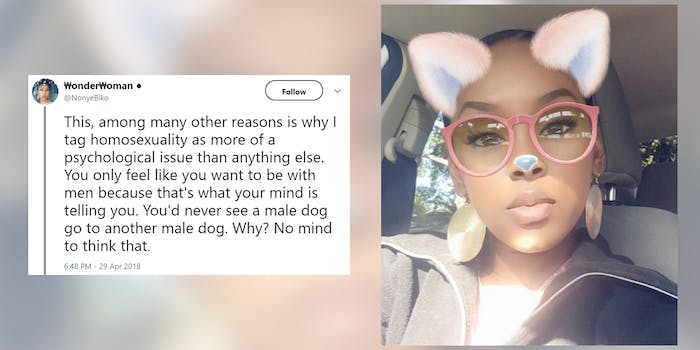 'You'd never see a male dog go to another male dog,' she claims.

User NonyeBiko, who says she is both a financial analyst at Goldman Sachs and a Ph.D. recipient in psychology from University of Birmingham, started a thread on Sunday arguing “homosexuality is NOT a choice” and those who are gay “cannot claim you were ‘born with it.'” She also said that being gay is a “psychological issue” and trans women who “feel the urge to act and live like a woman” just need a therapist.

As you would imagine, the original tweet—which has nearly 4,000 retweets and over 590 replies—has sparked outrage, especially since NonyeBiko made sweeping and factually incorrect judgments about sexuality and gender.

“The anus wasn’t designed for arrivals but departures,” NonyeBiko wrote in her tweetstorm on Sunday. “Also, if you’re a man who genuinely fancies inserting your penis into your lady’s anus, I hate to break it to you but you might have some docile homosexuality tendencies.”

Among other things, NonyeBiko also said, “The male is biologically designed to possess sexual affinity towards the female, and vice versa,” meaning “the penis and the vagina working towards the ultimate goal of procreation” is apparently humanity’s ideal. This, she concluded, means nature “demands that we stay true to our biological setup.”

“You only feel like you want to be with men because that’s what your mind is telling you,” NonyeBiko tweeted. “You’d never see a male dog go to another male dog. Why? No mind to think that.”

Of course, it didn’t take long for people to point the many factual errors in her analysis. After all, homosexual behavior has been widely observed in species around the world, from mammals to insects. This includes humans: There’s nothing psychologically wrong with being attracted to someone that shares the same gender as you. Nor is it wrong to transition genders. They are part of healthy human experiences.

“Everything in this thread is based on assumptions and it’s sad how people will mistake it for facts,” one Twitter user replied. “There is zero research done here and psychologists would disagree. You have no idea what kind of damage you [sic] doing.”

That’s when NonyeBiko claimed she has a Ph.D. in psychology.

Everything in this thread is based on assumptions and it's sad how people will mistake it for facts.. There is zero research done here and psychologists would disagree. You have no idea what kind of damage you doing

It's unfortunate that your PhD doesn't stop you from being homophobic, nor from effortlessly rationalizing said homophobia with nonsense mental gymnastics.

If as you claim its a psychological problem, then there must be a psychological solution for it. Apart from conversion therapies (which don't work), I hope from all what you've managed to come up with, that your solution isn't "to tell the mind to tell you something else"??

PhD in psychology but you don't know homosexuality isn't a disorder or "issue"??

“Tirelessly promoting” tell that to a good 40% of our political system in the US and 80% of the world. It’s funny that you think gay people are an inherent danger and destructive force against humanity. If anything we help curb a rapidly growing population and adopt orphans.

I have seen a female dog getting sexually cozy with another female dog… I have seen male lions do the do same with penguins… These incidences alone invalidate this thread… What i can confidently posit is that, science clearly does not yet understand nature completely

Lovely write-up dear but this lack facts all your points were tentative. I hope you read some scientific studies on this topic before you made these conclusions. Personally I feel homosexuality is both biological and psychological for some.

But homosexuality is seen in animals who lack cognitive capacity to comprehend any messages from anyone.again it’s universal, everywhere in the world there are homosexual people.This should demonstrate its natural for someone to have feelings for a person of the same sex🤷🏽‍♀️

After all, manipulating science to defend homophobia and transphobia is still bigotry, even if you use big words. Instead of using fake science to make a point, maybe just let people be who they are and stop forcing them to be confined to archaic gender roles.

the wacked out "science" in this thread is wild cuz it reminds u that in 2018 people still think like this https://t.co/TlqGY2G482

Twitter roasts are pretty common against homophobes and transphobes, in part because most online bigots are easily dealt with by invoking a bit of confidence and breaking down some of their reasoning.

At least in NonyeBiko’s case, those tactics seem to have worked. She’s since muted the thread and asked people to contact her directly if they want to chat. The Daily Dot reached out to NonyeBiko for comment but has not heard back.

“Everyone is on the woke side now,” she complained in one reply. “Nobody wants to be seen as ‘outdated.'”

For once, NonyeBiko offers some solid reasoning.