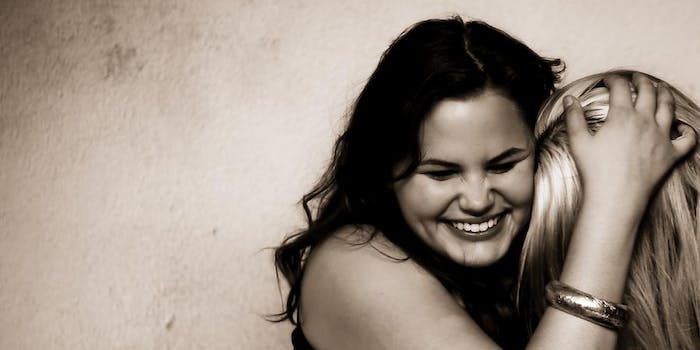 Why Twitter is the best place for female friendships

We hear a lot about women being harassed on Twitter. But it's an awesome place for women to make friends as well.

When I joined Twitter in April 2012, I can’t say that I expected the space to become a fertile ground for female companionship. Perhaps it’s more accurate to say that I didn’t have many expectations at all. At the time, my career aspirations were academic, and someone had mentioned to me that so-called “academic Twitter” was a useful cyber watering hole for those seeking a locus for remote colleagues, aid in research, and networking opportunities.

Academic Twitter—particularly the humanities contingent—indeed became a cherished hub. I was energized by the network of women contemplating gender issues in my preferred academic concentration, Victorian literature and culture, as well as feminist politics in higher education.  I relished the powwows with other women who worshipped at the same Victorian altar as me. I would jackknife into a communal gush over Villette or the Tate Britain’s Pre-Raphaelite collection. I would contemplate wine dates with the women I met, sharp and delightful even in 140 characters, dreaming of having the same meandering conversations in the flesh.

I would contemplate wine dates with the women I met, sharp and delightful even in 140 characters, dreaming of having the same meandering conversations in the flesh.

As freelancing necessitated a more robust Twitter “presence,” I found myself incapable of being satisfied with pithy chitchat. My newsfeed had burgeoned into a scroll of precious, brilliant, hilarious women, and, though the prospect made me uncharacteristically bashful, I thought I might endeavor to turn a few partners-in-banter into genuine companions.

But there’s no rhyme or reason to how a friendship fortifies through Twitter’s bite-sized exchanges, though the beginnings often follow a certain pattern. As The Billfold editor and Twitter pal Ester Bloom explains, “Someone faves, someone follows, and soon we’re tweeting girly emojis at each other the way 12th graders would sign each other’s yearbooks.” It’s a process galvanized by escalating enthusiasm: from acknowledgment and favor, to invested connection through mutual following, to increasingly familiar dialogue.

Friendship, we know, flourishes from obscure instinct. We surmise that we would enjoy someone’s company, and so we pursue closer and more intimate interaction. We confide. We bitch. In the crush of new misery, we find ourselves seeking solace in one another’s company.

Twitter’s gift economy of shares and retweets, as well as its dialogic structure, foster the sort of engaged communities that enable us to discern others who especially seem to ride our wavelength. Although we have the option of keeping our accounts private and only interacting with trusted friends and colleagues, Twitter is far more open and far-reaching than Facebook, the latter a more insular network where connectivity stems, generally, from prior acquaintance. So, if I have a mind to woo someone into friendship, I avail myself of Twitter’s easy, low-stakes forum for introduction.

I found writer Lyz Lenz this way. I admired one of her articles, and then realized that the byline reminded me of someone who had commented on one of my own essays with particular generosity and insight. And as it happens, her methods of initiating Twitter friendship match my own. “Twitter has been an invaluable social network,” she remarks. “I’ve made a habit of following writers I love. If I find something I like, I google the author and find her Twitter and then ply her with compliments until she cannot resist me. Frankly it’s creepy.”

But it’s not, really. For writers especially, Twitter often performs the sometimes-satisfying, sometimes-fraught conflation of business with pleasure. Meeting other writers makes sense, especially in a line of work that so often necessitates lengthy periods of solitude. I sometimes pass multiple days alone in my apartment, using my voice box exclusively to speak to my husband, my cat, or to hurl profanities at Microsoft Word. I’m fortified by jaunts on Twitter, where a quick laugh alleviates the panic of a stagnant word count. As Ester says, “it gives me the illusion, often, of having coworkers.”

And in the same spirit of camaraderie, reading and sharing work reminds us in a tangible way that we are not typing into the void— that others hear us as we hope to be heard. Conveying interest in a writer’s work may certainly be professionally advantageous, but expressing appreciation for another writer’s work means articulating the way their words, chosen so intimately, have illuminated something within us. It’s not a guarantee of friendship, but its grounds are sturdy.

Perhaps this is why so many of the friends I have made on Twitter are other women writers. My own work veers acutely toward the personal, so I lay bare some of the most sensitive aspects of myself in published essays. Writing in a deeply personal vein does not indicate a desire to connect with one’s readers – even I have boundaries, though sometimes I wonder where I draw them. Yet because my essays are so personal, other writers who read them often feel as if they know me before we’ve spoken.

Not long after we became aware of each other, Alana Massey and I began sharing essay drafts with each other. And as Alana suggests, the possibility of Twitter as a gateway to intimacy is by no means rare or far-fetched: “I don’t really believe in ‘online personas’ as these inauthentic versions of ourselves…rather, they are the most thoughtful versions of ourselves that we’re presenting,” she told me via email. “So I’m rarely disappointed by what happens when these conversations leave Twitter and enter interpersonal spaces.”

Oftentimes, the trajectory is quick, too. A blaze of excited tweets prompts the exchange of email addresses and phone numbers. If you’re fortunate enough to live near one another, it can even prompt plans for an IRL rendezvous. Writer Sara Black McCulloch chronicles the rapid closeness that developed when she and Fariha Róisín, fellow writer and Two Brown Girls podcast cohost, stumbled on each other’s Twitter handles.

“We bonded over Drake jokes and then took to emailing each other (about movies, mostly, then life),” she said via email. “[When] I was visiting [Montreal] we met up after months of emailing each other. It was supposed to just be brunch, but that turned into another coffee, then dinner and an episode of True Detective. We connected instantly—like, this has never happened with a female friend before!—and we’ve been tight ever since.”

Sara’s experience with Fariha indicates a practical commonality of Twitter-born female friendships: Eventually they will migrate to other, more private venues. Sara cites email as her preferred mode of communication. I tend to favor GChat or text messages, yet sometimes I find myself simultaneously engaged in private and public conversations with the same person, tweeting at them and emailing them at the same time.

There’s pleasure in performance, and Twitter encourages it – allows for it, even as I’m unraveling in a panic two tabs over. And as The Toast’s Nicole S. Chung implies, Twitter remains a critical space for maintaining friendship, although the conversation may extend beyond it: “It’s rare for [real friends] to stay on Twitter. There will at least be a few emails or some GChats, or we’ll become friends on Facebook, too. But Twitter is, quite often, the primary mode of communication.”

Indeed, of all my close Twitter friends, Nicole is the only one who lives in my general vicinity. But the tragicomedy of two adults attempting to make plans is familiar to one and all, and in the spaces between, our personal correspondence coexists with an especially active Twitter rapport.

“I think all my experiences with other women on Twitter have been fairly positive,” Nicole says. “I love connecting with new people and finding out what they’re all about and seeing if they can change my mind about something – I’m a communicator at heart, more than anything else, and so Twitter is a good place for me to hang out.”

And there’s power in the blooming numbers of women communicating there, “taking up space,” as Sara puts it. The Daily Dot’s Angela Lashbrook emphasizes, “the foundation that is female support on Twitter is really strong…when you know people have your back, it makes weathering the bullshit a little easier.”

Bullshit wriggles its way into any public forum, and both Angela and Alana call attention to the culture of misogynist harassment that sometimes interrupts—and thus heightens the consequence of—the conversations women engage.

“It is at once a welcoming space for finding women but also a space where men who hate women lie in wait for us to say something that gets them all fussy and irate,” Alana remarks. “But for all the damage that does to making it feel safe, I know that it has also opened the eyes of a lot of sensible men about how profoundly hateful some men on the internet are toward women who have the audacity to like themselves and assert themselves in public.”

In this context, cultivating female friendships on Twitter can become a form of activism, especially when those relationships are sparked by hashtag conversations on gender and intersectional feminism. Writer Alison Hart points to the “signal boost to social justice issues, feminism being one of them. #YesAllMen, #WhyIStayed, #WhyILeft…It’s comforting to see in your timeline that you’re not the only one pissed off about the VIDA Count or smh’ing over the NBA’s failure to acknowledge all the terrific books by women last year.”

Cultivating female friendships on Twitter can become a form of activism.

The hashtag activist initiatives Alison mentions are tethered to women’s larger, critical endeavors to exist in public, loudly. To champion and love one another – and to fervently contest those that would silence us.

And still, like anything else, Twitter has its drawbacks. How could it not? For as long as we communicate, we will misinterpret and, in our turn, be misinterpreted. Spats will break out on occasion. There will be cliques, or at least the illusion of them. We cannot befriend everyone, and we’re not under any obligation to follow every Twitter user that has reached out to us. We only have the responsibility to be kind, and to navigate social spheres empathetically.

When we do that, Twitter wields a formidable power. Because when women write to each other, talk to each other, we cohere as a juggernaut of progressive change. We fill the world with our words, and we set it on fire.

Photo via Robert Bejil/Flickr (CC BY 2.0)

Rachel Vorona Cote is a writer living in Washington, D.C. She writes and has written for Jezebel, The Rumpus, The Billfold, and various other publications. You can find her—where else?—on Twitter here.