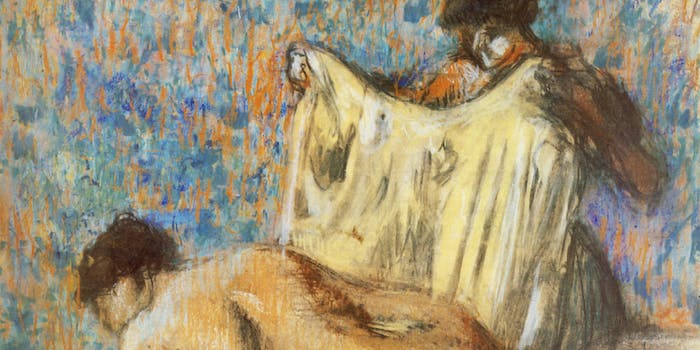 Warning: This article contains explicit imagery that is not safe for work (NSFW).

While Tumblr’s adult content purge came as no surprise to many sex workers and adult artists—some reported having their NSFW blogs taken down as early as November—Tumblr’s official policy change effectively displaced adult content creators. They were not only robbed of a vital avenue for financial support but of a larger sense of community.

This was particularly true for queer adult artists, in part because Tumblr had long fostered an inclusive and affirming environment for LGBTQ users. While many of the internet’s most popular adult content platforms largely cater to a cisgender and heteronormative gaze, Tumblr gave queer artists room to explicitly illustrate their favorite ships, create kinky furry artwork, and depict trans bodies in realistic and affirming ways. Once the platform banned adult content, it scattered queer artists to various corners of the web, ripping many queer creators from their followers.

“I think there’s a lot of genuine support and love passed around in a community based on something so intimate and vulnerable as adult art that you won’t get many other places, whether you’re an artist or a fan,” Luxatile told the Daily Dot over email. “So as such, I’m worried for creators with smaller followings or more specific niches, who are undoubtedly going to face problems growing successfully.”

Tumblr wasn’t just the incubator for Luxatile’s coming out, it was also a major source of emotional and financial support. The NSFW ban essentially cut her following from a combined 6,000 across Tumblr and Twitter to just under 2,000 followers on the latter. While Luxatile stresses there are still platforms and loyal fans to help her stay afloat, she’s more concerned with how Tumblr’s adult content purge has splintered its queer community.

With Tumblr's shit and all that I'm more worried than ever about my ability to make money off art, so maybe this is a good time to say again: if you wanna help a poor & depressed girl just live her life, check these linkshttps://t.co/ib6d5Q2gzhhttps://t.co/lLhGlYegFe

One of the sites queer creators have scattered to is Pillowfort. Originally announced in 2015, Pillowfort describes itself as a “hybrid of Tumblr, Twitter, and LiveJournal,” although it functions a lot more like Tumblr and LiveJournal than anything else. Users can post original content, join “communities,” reblog each others’ posts, and comment in discussion threads underneath posts. The site’s policies are also incredibly 18+ friendly, with aged-up characters and fictional illustrations of “divisive” and “problematic” kinks allowed on the platform.

Myrkky, a 29-year-old queer adult artist from Finland, has accounts spread across Pillowfort, Twitter, Newgrounds, and Mastodon. She originally began illustrating adult art on the defunct website y!Gallery and moved to Tumblr afterward, which she considered “a good place to delve more into fandom and adult art.” While Myrkky still posts SFW content on her Tumblr, the NSFW ban came at a “pretty bad time” for Myrkky, as she was just starting to gain followers and considered opening art commissions.

However, she says she likes Pillowfort in its current state, even though she can tell it’s “still pretty new” and was “ill-prepared for the sudden influx of new users with the Tumblr exodus.”

“I like that there are communities where you can share your stuff, like for Harry Potter or adult art,” Myrkky told the Daily Dot over email. “It makes it easier to find people who share your interests. It’s still the early days of Pillowfort, but I’m hoping it will grow and become a new and better Tumblr.”

Pillowfort isn’t the only platform swallowing up Tumblr exiles. Like Pillowfort, Mastodon has long been known as an alternative to a mainstream social media platform: Twitter. But unlike Pillowfort, which is still in its early stages, Mastodon is a free open-source software (FOSS) project that has been around since November 2016 and sports a thriving userbase. That includes a sizable queer community filled with adult artists and their fans.

Instead of relying on one centralized community, Mastodon is populated with dozens upon dozens of “instances,” or separate, self-governed servers part of one gigantic Mastodon “fediverse.” After the NSFW purge, even Mastodon’s founder Eugen “Gargron” Rochko figured Tumblr users would join the Mastodon community. When asked by this reporter during a Q&A thread, he commented: “Not surprised. This happened before.”

The Art Alley instance is a NSFW-friendly Mastodon server dedicated to artists, commissioners, and their appreciators, and it’s already one haven for queer adult artists; it hosts over 6,000 users alone, with over 25,000 posts, or “toots.”

Nepsah, a transmaculine nonbinary adult artist, posts both SFW and NSFW art on the Art Alley instance. He told the Daily Dot that he originally joined the queer adult content community after he found it difficult “to find content of bodies that resembled my own both before and after some of the transitioning I’ve done.”

Nepsah likes his experience on Mastodon overall. Even if the project lacks some of the features that made Tumblr easier to use, like a post queue and an official mobile app, he feels that more people are seeing his work on the new platform.

“Since joining, I haven’t seen an ounce of negativity, whereas I could hardly go more than a couple of hours on Tumblr without seeing some long post shaming people for various things,” Nepsah told the Daily Dot over email. “The general feel of the server I’m on is just… a lot more positive. Starting out, I was really nervous to share any kink-heavy drawings on Tumblr, but I haven’t felt that nervousness on Mastodon.”

But Mastodon isn’t an upgrade by any means. Nepsah still has two blogs on Tumblr: one for SFW art and one for NSFW pieces. But unlike some of his peers, Nepsah was still new to posting explicit artwork when the Tumblr NSFW ban happened, and many of his adult Tumblr users didn’t transfer over to to the fediverse. While Nepsah chose to continue using Tumblr, he’s forced to make blog posts on Tumblr that direct his 18+ followers to his Mastodon whenever he makes new NSFW posts. It’s an awkward process, one that “definitely makes it harder to engage” with followers who haven’t left.

For many, Twitter seems to be the go-to choice during the Tumblr exodus: Between five adult artists interviewed by the Daily Dot, only Nepsah did not share his recent adult posts on Twitter.

“I’m still angry about it, to be quite honest,” Cannibal Prince told the Daily Dot over email.

Over the past seven years, Cannibal Prince earned a significant following on Tumblr, with nearly 7,000 followers before the NSFW ban was announced. Like Nepsah and Luxatile, the Tumblr ban significantly disconnected Cannibal Prince from their following: Just over 1,000 Tumblr users migrated to their Twitter account, or less than a quarter of their Tumblr follows.

This is particularly rough for Cannibal Prince, because unlike Myrkky, they cannot manage multiple galleries at a time. Doing so is “quite exhausting to an introvert” like them, who would rather spend their time creating new artwork than administrating content platforms for it.

“I found my new home on Twitter for now,” Cannibal Prince said. “It’s not perfect, but I like it. A lot of my artist friends moved there too, and it fits to my style of posting which is a little more casual, and part of following me (I think) is slowly getting to know my characters through doodles and small comics that don’t really work well on more gallery-styled specifically art platforms.”

Losing your main community is devastating for adult artists as it is. But losing Tumblr was so much more than just one revenue stream for queer adult artists: Many came out on the site, figured out their identity through it, or saw it as an opportunity to experiment and grow as artists.

But the queer adult content community is resilient. Times of crisis can bring creators together and make sure marginalized artists land on their feet, something the queer community knows all too well both inside and outside of the adult world. If there’s one message artists agree on, it’s to support one another, share each other’s content, and make friends within the community.

“I know it’s scary that our Tumblr community is gone, but the queer adult art community as a whole will always live on, and I like to think we’ve got each others’ backs,” Luxatile said. “If you’re worried about the future, the best thing you can do is plan for it and help others do the same.”