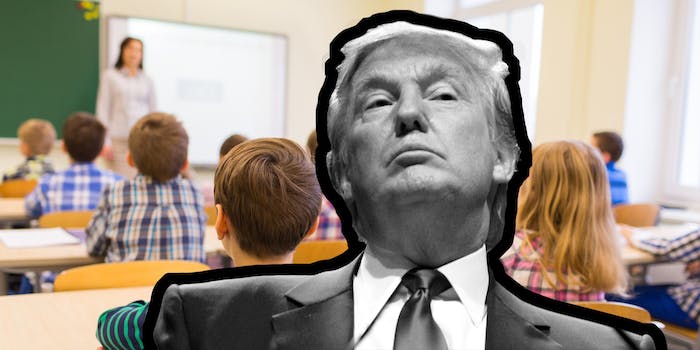 Life in Trump’s America: A mixed-race educator in the rural South speaks

One woman shares how her community has been affected by Trump's win.

This is the first in a series of essays on what lives look like in post-election America.

It’s been just over a week in “Trump’s America.” Across the nation, there has been an increase in reported hate crimes, as those once considered to represent a fringe sentiment of society have been emboldened by the election of a president endorsed by the KKK. Not one to distance himself from that endorsement, Trump has begun building a cabinet that includes individuals tied to white nationalism.

In my home state of North Carolina, we’ve seen an increase in racial taunting and violence, including the assault of a black trans woman in Charlotte with a hatchet. Overtly racist, anti-Semitic, anti-immigrant, anti-Muslim graffiti has appeared in Durham, including one message that said, “Black Lives Doesn’t [sic] Matter and Neither Does Your Vote.” My Facebook feed has been filled with personal stories of fear as my black, Muslim, brown, and queer friends and family are reporting being harassed, taunted, and intimidated; meanwhile, a lot of my liberal white friends are debating with people of color about the effectiveness of wearing a safety pin.

Since my thoughts on the election were recently published in a number of online forums, I’ve been bombarded with emails and Facebook messages from strangers, many full of affirmations, some of indignant condemnation of my views, and occasionally a threat. How has the election of Trump impacted me? When you are a racially ambiguous woman who could pass for white who is working in classrooms in the rural South, that is an interesting question, to say the least.

Let’s start with what I do. I am a teacher coach for an education non-profit, so Wednesday after the election, I was in classrooms in rural eastern North Carolina. Make no mistake: Students are terrified. This is true across the nation, but particularly in the rural South where the teachers whom I support work in predominately black and brown, economically and socially disenfranchised communities. The kids are fearful; they don’t always know who they can talk to or trust, and even children whose parents voted for Trump are sometimes uncertain of what they should say to their peers.

On the other hand, some young Trump supporters are showing up to school in Trump hats and T-shirts and some are engaging in horrific taunting of their peers. Teachers are caught between not wanting to get in trouble with parents or administration and not wanting to alienate at least some of the students in their classes, so even those compelled to address the implications of the election often stay silent. Many of those who have spoken up have been disciplined. The teachers I support, and many others across the nation, can see their students hurting, grieving, fearful, and few are able to fully advocate. To those who are, in many instances it’s coming at a great personal and professional cost.

“The kids are fearful; they don’t always know who they can talk to or trust, and even children whose parents voted for Trump are sometimes uncertain of what they should say to their peers.”

Of course, when about 85 percent of your public K-12 teaching force is white women and exit poll data suggests that over half of white female voters voted for Trump, then we need to reconcile that a lot of kids are in classrooms with teachers who themselves may not be feeling, seeing, or living the harsh consequences of Trump’s America. If racism—both overt and in the form of microaggressions—was rampant in classrooms across America before the election, this is a compounded reality now.

With regard to who I am: I’ve woken up each morning knowing that I live in the same racist, classist, xenophobic, homophobic, patriarchal society that I lived in before Nov. 8, but the way that overt racism and other oppressive behaviors have been legitimized in the last week and a half is relevant. As a very fair-skinned black and indigenous woman often misidentified as Hispanic, I have the ability to code-switch with ease and blend in, which has often protected me. This was never the reality for my darker skinned friends and family who have always had targets on their backs, heads, chests, and every other body part regardless of any respectability politics that they may invoke for survival tactics and coping mechanisms. For a lot of white people, though, whose lived experiences didn’t include those realities, this election has awakened something that I fully intend to leverage for purposes of organizing toward justice. Despite how devastated, angry, frustrated, and fearful we are, this is truly a time for organizing and strategizing, and we need everyone.

Prior to the election, I had already been planning a weekend-long anti-racist leadership and organizing workshop for members of a Jewish alumni group of which I am apart. My partner in the creation of this experience—a fellow organizer and fellow Jew of color—and I wanted to make sure that racial equity and identity development was a key piece of the work that our network and community is engaging in. The Jewish value of “repair the world,” tikkun olam, drives us in our work and reminds us that in Trump’s America, a repaired world must include anti-racism, anti-sexism, anti-oppression organizing. We took on the responsibility and seized the opportunity to create a space where people can come together to grow in their competencies of listening, deconstructing white supremacy and racism, increasing understanding of the political and historical context that have led to the present day, and speaking truth to power whenever and wherever possible. The participants in this experience, called “Catalyst: Race, Racism, & Tikkun Olam,” will begin arriving from around the country in the next several hours, ready and eager and hungry to learn and to fight for justice.

“Between appointing those with white supremacist ideologies to positions of power and alienating almost all marginalized groups, it’s clear to me for whom Trump wants America to be great.”

I will continue to create such learning opportunities for my peers, community members, and the teachers I support so that they can do the same with their students. In Trump’s America, we are organizing, advocating, and educating; we are resisting oppression and calling in all people who have a stake in the loss of equality, equity, and progress that Trump’s presidency represents.

For people of color and other marginalized communities, the reality is that there was never a time when this country was “great.” Between appointing those with white supremacist ideologies to positions of power and alienating almost all marginalized groups at one point or another on his way to the Oval Office, it’s clear to me for whom Trump wants America to be great.

And yet I hope a critical hope that America could be great for all of her people. It’s a kind of hope that knows that apathy is the enemy of the movement, but is also armed with the knowledge of what we are up against in the fight for equity. It’s a kind of hope that doesn’t hide from harsh realities or accept oppression in any form merely because it has the support of a president behind it (as though this were the first time that this has been America’s truth). I hold this conviction in hope because I believe in my responsibility and ability to live out the value of tikkun olam and I know that to repair the world, you must see and understand its brokenness. I happen to believe that those who are somewhat broken ourselves are uniquely positioned to lead and support others. It’s my truth that repairing the world starts with repairing each other.