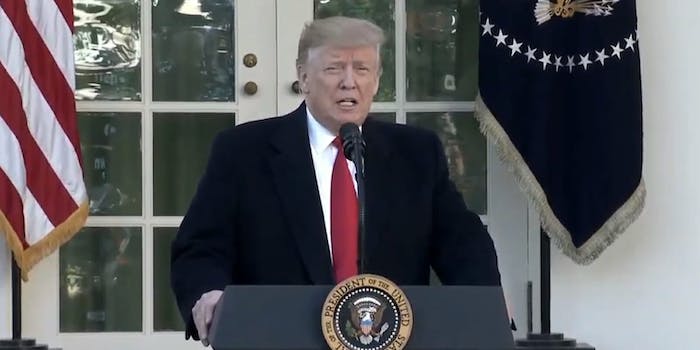 The government will be open for three weeks.

President Donald Trump announced on Friday afternoon that the longest government shutdown in U.S. history will end, at least temporarily.

The president made an address around shortly after 2:15 p.m. ET on Friday in the White House Rose Garden.

“I am very proud to announce today that we have reached a deal to end the shutdown and reopen the federal government,” he said. “As everyone knows I have a very powerful alternative, but I didn’t want to use it at this time. Hopefully, it will be unnecessary.”

The bill the president will sign will keep the government open for three weeks, he said, until Feb. 15. He also lauded his plan to build a border wall along the country’s southern border.

Trump said is a deal isn’t made by Feb. 15, he will declare a national emergency to build a wall.

BREAKING: President Trump: "We have reached a deal to end the shutdown and reopen the federal government." pic.twitter.com/Z7fgYU1KLE

The shutdown has left thousands of federal workers without paychecks for several weeks as Democrats and Trump battled over funding for his desired border wall.

The effects of the unpaid workers—coupled with at least 53 percent of Americans blaming the president for the shutdown, according to one recent poll—could have factored into Trump’s announcement on Friday. News today that airports were shutting down because of employees refusing to show up also may have played a part

Earlier this month both Trump and the Democratic leaders made national addresses, with the high-ranking Democrats calling Trump’s call for a border wall ineffective and Trump demanding that the situation was a “crisis.”

After originally saying he didn’t mind owning the shutdown, the president shifted gears shortly after the addresses claiming that the “buck stops with everybody.”

You can watch the president’s remarks here.