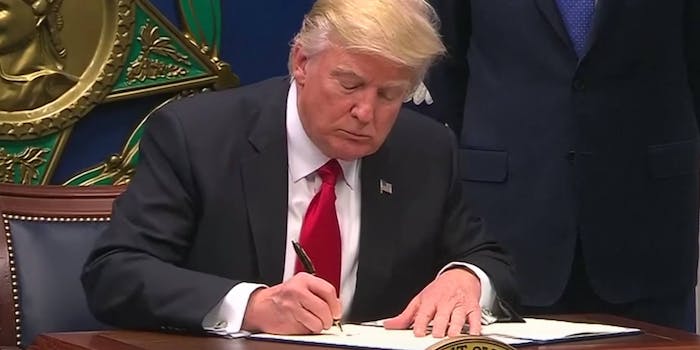 Protests against Trump’s refugee ban sweep through D.C. and cities across America

They're happening all over.

Protests erupted at major airports throughout the United States on Saturday, a spontaneous and massive response to President Donald Trump’s recently signed executive order on refugees and immigration.

Although a federal judge put a hold on parts of Trump’s order late that night, deciding that that the people being detained in U.S. airports had to be freed, the protests continued into Sunday.

As is visible in countless pictures, videos, and accounts on social media, protesters descended on cities throughout America on Sunday. So far, marches and demonstrations have already been reported in New York, Georgia, California, Massachusetts, Nebraska, Oregon, Illinois, Pennsylvania, Texas, Washington state, and in the nation’s capital, with protesters taking their message right to the edge of the White House.

"Trump, don't talk so much!" | At the White House #NoMuslimBan protest pic.twitter.com/lDYI809kWa

Some awesome signs from the #NoBanNoWall protest in front of @WhiteHouse pic.twitter.com/Djm70qI5G1

More than just a little protest at the White House today. Marching down Penn. to the Capitol.#cbc pic.twitter.com/mo8pZNFbAb

PHOTO: In Boston, a protester held up a sign featuring a photo of Anne Frank. Updates from the Copley protest: https://t.co/ddsXfLp2dQ pic.twitter.com/OG4gKTk8Qt

Protesters in Boston – hearing them from the 35th floor @WCVB @CNN @washingtonpost pic.twitter.com/SFLzApPw6H

This is the picture of an America that rejects discrimination: Major Boston protest against Trump #MuslimBan pic.twitter.com/D6guuc3JfV

"This is what democracy looks like." #NoBanNoWall protest in park outside of White House pic.twitter.com/KLTSkDvGxa

The Trump administration released a statement on Sunday afternoon, reaffirming its belief that the refugee and travel bans are appropriate and essential to protect American safety. It also lashed out at the media, insisting that the bans were not based on religion.

America is a proud nation of immigrants and we will continue to show compassion to those fleeing oppression, but we will do so while protecting our own citizens and border. America has always been the land of the free and the home of the brave. We will keep it free sand safe, as the media knows, but refuses to say. My policy is similar to what President Obama did in 2011 when he banned visas for refugees from Iraq for six months. The even countries named in the Executive Order are the same countries previously identified by the Obama administration as sources of terror. To be clear, this is not a Muslim ban, as the media is falsely reporting. This is not about religion – this is about terror and keeping our country safe. There are over 40 different countries worldwide that are majority Muslim that are not affected by this order. We will again be issuing visas to all countries once we are sure we have reviewed and implemented the most secure policies over the next 90 days. I have tremendous feeling for the people involved in this horrific humanitarian crisis in Syria. My first priority will always be to protect and serve our country, but as President I will find ways to help all those who are suffering.

By way of contrast, here’s what Trump’s original proposal was in December 2015, when he suggested implementing a travel ban for the very first time.

Donald J. Trump is calling for a total and complete shutdown of Muslims entering the United States until our country’s representatives can figure out what is going on.

In other words, in a little more than a year, the “total and complete shutdown of Muslims entering the United States” became an ostensibly non-religious ban on travelers or refugees from seven countries that just so happened to be majority Muslim. Former Trump campaign surrogate and current White House cybersecurity adviser Rudy Giuliani explained his role in that change to Fox News’ Jeanine Pirro on Saturday, and his explanation was pretty suggestive.

I’ll tell you the whole history of it. When he first announced it, he called it “Muslim ban.” He called me up, he said “put a commission together, show me the right way to do it legally.” I put a commission together, with Judge Mukasey, with Congressman McCaul, Pete King, a whole group of other very expert lawyers on this, and what we did was we focused on instead of religion, danger, the areas of the world that create danger for us. Which is a factual basis, it’s not a religious basis. Perfectly legal, perfectly sensible, and that’s what the ban is based on.

It seems safe to say that the protests aren’t going to stop anytime soon, and they almost surely won’t be the last, considering the hard-right angle of so many proposals the new administration is reportedly eyeing. Perhaps the next big battle in D.C. will come next week, when Trump is expected to announced his pick for the Supreme Court.