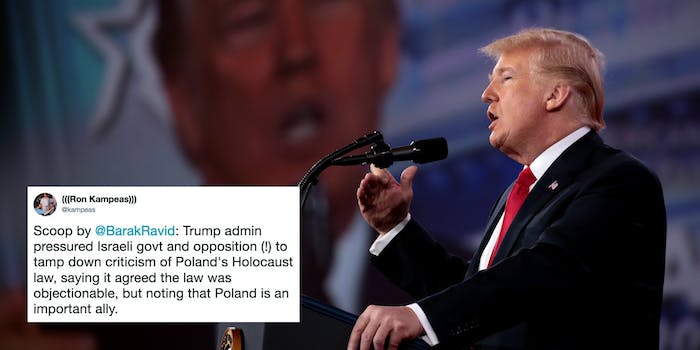 The law could make it criminal for Polish citizens to criticize the government's part in the Holocaust.

The Trump administration has asked the Isreali government to curb its criticism of a Polish law that would punish citizens who speak out against their country’s part in Holocaust crimes.

According to Barak Ravid of Israel’s Channel 10 news, via a Hebrew-translated-English article for Axios, the White House has urged Israel “several times in the last few weeks” to solve the crisis between Israel and Poland for the sake of preserving the U.S.’s allyship with the latter.

These messages, Ravid wrote, came from the White House and advisors, including from Vice President Mike Pence, who met with Israeli opposition leader Yitzhak Herzog. Pence reportedly asked Herzog to “temper his critical statements against the Polish government and help solve the crisis,” while Herzog stressed to Pence how offensive and unacceptable the Polish bill’s rhetoric is. At the time of the bill’s introduction in February, Israeli Prime Minister Benjamin Netanyahu called it an “attempt to rewrite history.”

In addition to the Trump administration’s pleas to Israel, the State Department also asked the U.S. Israeli and Polish embassies to co-sponsor an annual Holocaust memorial day ceremony, which officials from both spoke at on Wednesday.

The Polish bill, the violation of which carries a sentence of up to three years in prison or a fine, is currently under constitutional court review after its negative reception in Israel and the U.S. The constitutional court is expected to give its verdict as early as Saturday, and the results could potentially end the crisis with Israel.

“The Americans made clear they don’t like the Holocaust law, think it is unacceptable and asked the Polish government to fix it. But at the same time, they told us Poland is an important U.S. ally, especially in NATO, and also an Israeli ally and therefore there is a need to deal with the crisis carefully and not damage the alliance,” Ravid wrote he was told by a senior official at the Israeli foreign ministry.