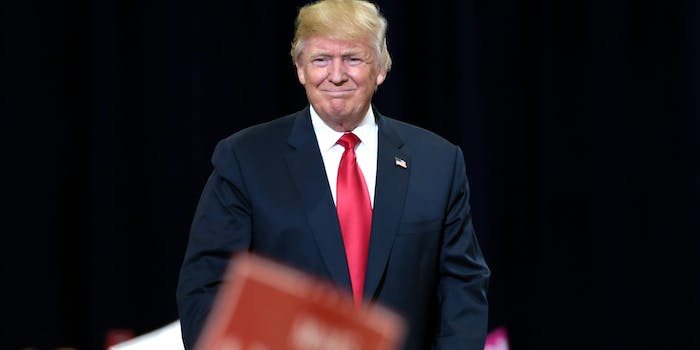 Trump reportedly once said, ‘There is nothing in the world like first-rate p**sy’

Trump also allegedly hung out with a sex offender during this trip.

President Donald Trump’s obsession with “pussy” seems to be a long-standing tradition. A journalist and an editor at the now-defunct Maximum Golf claim Trump once said, “There is nothing in the world like first-rate pussy.”

The proclamation happened while Michael Corcoran shadowed Trump at his Mar-a-Lago resort to write a profile on him in 2000. At one point, the future president pulled Cocoran aside, pointed out a “young socialite” at the club, and remarked about her “first-rate” status.

Years before the @accesshollywood tape, @realDonaldTrump was talking about "pussy" on the record. https://t.co/4PRCLnLcZO

Originally, Corcoran planned to use the quote in the piece’s kicker, but editor-in-chief Michael Caruso, who now serves as editor-in-chief for Smithsonian Magazine, changed “pussy” to “talent” before letting the piece run. Maximum Golf editor Joe Bargmann, who edited Corcoran’s story, confirmed the quote was altered.

“I was asked to change the last word of the story from ‘pussy,'” Bargmann explained to the Daily Beast. “When I refused, my top editor changed the quote.”

Corcoran’s time with Trump also raises further questions about the president’s dealings with other predatory men. While flying over to Mar-a-Lago with Trump, Corcoran boarded the future president’s private 727 along with Jeffrey Epstein, a New York financier and businessman who was later convicted for soliciting prostitution from underage girls. Trump appeared friendly with Epstein, and on the plane, a young woman boarded that was “made up to look a bit older.” Albeit, Corcoran admits nothing “untoward” happened on the flight, although her appearance itself raises further questions about whether Trump knew of Epstein’s predatory behavior.

“You broke the cardinal rule, Jeffery!” Trump teased Epstein while waiting for him to board, the Daily Beast reports. “Never be late for someone else’s plane!”

@thedailybeast just reported that @POTUS told a reporter that nothing is better than "first rate pussy" and hung out w/underage girls & Jeffery Epstein on his private plane and NOBODY IS EVEN TALKING ABOUT IT.

Trump’s most well-known “pussy” reference was when he said he could grab women “by the pussy” during an off-air recording with Access Hollywood’s Billy Bush. President Trump also referred to Sen. Ted Cruz as a “pussy” during a campaign rally, confirming that Trump does, in fact, love to use the term both publicly and privately.