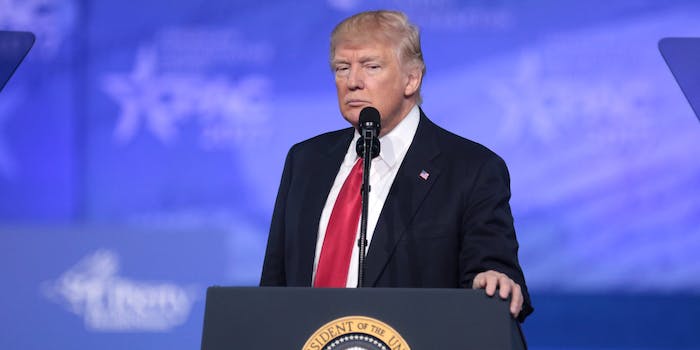 Trump's emails and private calendar from December 2007 are now public.

President Donald Trump’s emails and private calendar show that he was in the Beverly Hills Hotel and the Trump Tower during the time that Summer Zervos, a former contestant on The Apprentice, said he assaulted her, the Washington Post reports.

The records became public on Thursday during the discovery phase of Zervos’s defamation lawsuit against Trump. The president alleged that she—and the other women who came forward with stories of sexual misconduct before the 2016 election—were liars. In response, Zervos sued for defamation.

Zervos said she met up with Trump in his New York office at the Trump Tower and that Trump kissed her twice during this encounter. Zervos said she was bothered and told family and friends about the interaction.

Zervos said later on, she met up with Trump at the Beverly Hills Hotel, where she said he touched her inappropriately. She said she met up with him the next day at the Trump National Golf Club in California. Trump’s personal records show that on Dec. 21, 2007, he went to the Beverly Hills Hotel Hotel and then visited the golf club the following day, according to the Post.

Previously, Trump said he had not met Zervos at the Beverly Hills Hotel. But the calendar records seem to show that a meetup was possible around this time.

“[Zervos’] account of the underlying sexual assaults has now been corroborated, in close detail, by documents produced from [Trump’s] own files,” Zervos’s lawyer wrote in a memo, according to the Post. Meanwhile, Trump’s lawyer continues to say that Zervos’s claims are “meritless.”

The lawsuit is ongoing, but it’s possible that it will wrap up before voters head to the polls for the 2020 presidential election.