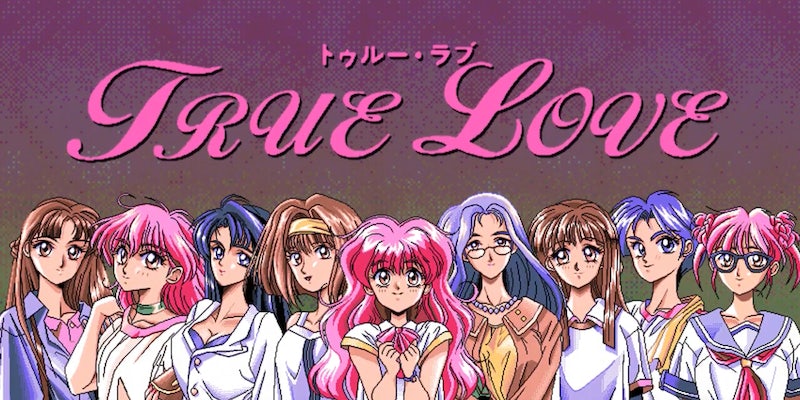 FAKKU is rereleasing this cult classic adult dating sim from 1995

Anime fans are loving it.

Only a few adult visual novels (or eroge games) were localized from Japan to the U.S. during the 1990s. One of the most memorable included True Love Jun’ai Monogatari, which follows a 19-year-old college student’s romantic endeavors with his classmates and acquaintances. But after becoming abandonware during the 2000s, one American publisher is finally rereleasing True Love in English.

I'm so happy we are releasing this game! True Love was one of the first dating sims I ever played and it honestly had such a big dumb impact on my life. I've been talking about this game in panels and at events for years, don't miss it! https://t.co/oqKm3xsZqp

FAKKU is also offering a pair of limited-edition T-shirts inspired by True Love from the popular queer artist and “self-proclaimed glitch witch” DataErase. “It’s very surreal to actually get commissioned to do like glitch art for an actual official rerelease of an old pc98 game?” she tweeted.

This is sooo cool! Seeing old games get rescued like this is awesome and completely unexpected in a wonderful way!

Now you can say that…
you found True Love at Fakku. https://t.co/vL1LL4DSQs

Others were pleasantly surprised.

WHAT?! This is one of the most important, defining experiences in my entire gaming life. And it's coming back, officially? I am all over this when it releases.

Goddamn Jacob, I know you love "True Love", but this is something else I did not expect. LOVE IT.

True Love was developed by Japanese studio Software House Parsley and released in Japan for the NEC PC-98 computer line in 1995. Four years later, the game was localized for Windows 95 and released in the U.S. and Europe, where it became a cult classic. Despite its popularity in the U.S., the game seemed to be in licensing limbo and only available to play through pirated sources until this week.

Then writing for Paste magazine, Kotaku’s Gita Jackson broke down True Love’s complicated handle on love and sex by connecting it with her own coming-of-age online. “True Love was all about the emotional foreplay, the dates leading up to intimacy, the touches and signs, the gestures,” Jackson wrote. “The sex scenes in the game are brief, and it asks you to really fall in love with these women, to ask yourself, what kind of girl do I want?, in order to be satisfied by them.”

For more information, head over to FAKKU’s thread on True Love ’95. The Daily Dot reached out to FAKKU and founder Jacob Grady and is awaiting comment.