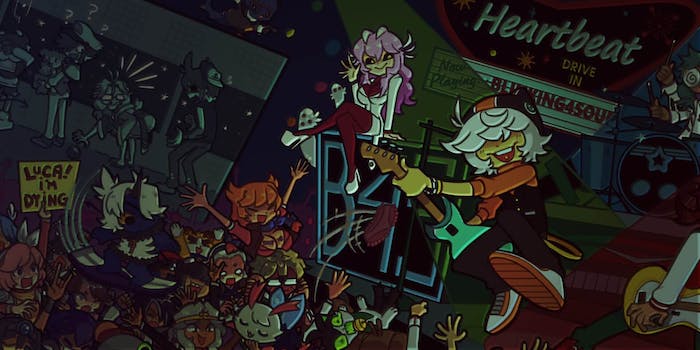 Ex-fans and former friends say the game's lead developer has a history of transphobia.

Indie role-playing game Heartbeat was once hailed for embracing empathy, love, and lesbianism. But now the game’s trans fans believe the developers are openly mocking the U.S. transgender population’s rates of attempted suicide.

The controversy began apart from Heartbeat developer Chumbosoft. Lead developer and artist Shepple is dating Nikotine, who is a well-known fandom artist in the Heartbeat community. On Sept. 20, Nikotine tweeted a series of transphobic statements targeting trans women, writing she is “ashamed to be born in [America]” because “men believe they can mutilate their penis and dress in an ‘effeminate’ manner to become ‘female.'”

“Lesbians don’t like penis no matter how you chop it up,” Nikotine wrote. “You can surgically mold your penis into the Eiffel Tower if you want. You’re not going to become France. You’re not impressing anyone.”

Nikotine also said her “personal views” on trans women “have nothing to do with my girlfriend’s game.”

But three days later, Nikotine announced that Heartbeat “will be on a fall sale for 35% off” and have a 41% discount when bundled with the game’s soundtrack. In light of Nikotine’s previous statements, the numbers were suspicious.

The American Foundation for Suicide Prevention and the UCLA School of Law’s Williams Institute report the attempted suicide rate among transgender people is 41%. The U.S. Centers for Disease Control and Prevention claims 35% of transgender high school students have also reported suicide attempts.

Heartbeat players said given the timing, it’s hard to believe the choice of discount rates is a coincidence. Some expressed their shock in gaming forum ResetEra.

“I’ll never understand passionately hating a group of people to the extent where you feel you have to ramble about it on social media and mock them at every opportunity,” one user wrote. Others wondered if they could get a refund for Heartbeat. “I bought this a couple months ago and want my fuckin money back, foul excuses for humans,” a player said.

Nikotine, who declined to comment to the Daily Dot, hasn’t backed down on her anti-trans statements.

“Hey man, all I did was share an opinion, and trannies went and tried to fuck with the game just because the lead dev is my gf,” she tweeted on Wednesday, using a transphobic slur. “I had no intentions to bring Heartbeat into this, but it looks like they did.”

Chumbosoft developer Shepple has also been accused of making anti-trans comments. One of Shepple’s former friends, Twitter user @BeetleButch, tweeted in August that Shepple and other users had a secret channel in the Heartbeat Discord where users would trade transphobic beliefs and “mock the trans members of the community.” @BeetleButch also tweeted screenshots from April of direct messages between her and Shepple. In the messages, Shepple wrote transgender rights are “antithetical” to radical feminism because the latter is based in “bio-sex violence towards girls.”

“This was after I tried to talk to [Shepple] and explain how some of the things she said in the general chat were very off putting to her large trans fan base,” @BeetleButch tweeted on Aug. 23. “I thought I had gotten through to her only to find out about the secret channel.”

Others made similar accusations. Twitter user @octog4y shared a Discord conversation with Shepple in which the developer claimed that she is “suspicious” of the trans rights movement. She also claimed one’s assigned sex is “immutable” and that trans people are “rewriting the rules for women’s rights and spaces.”

“[Trans-exclusionary radical feminist] isn’t even a group, it’s a newly-made buzzword used to shun people, especially women, who dare commit the crime of wrongthink,” Shepple said in the message, later adding: “I have every right to question the movement that’s done nothing but regress us backwards, to tell masculine women they are actually men (personal experience), and that feminine men are women all because of perceived stereotypes.”

Shepple did not immediately respond to the Daily Dot’s request for comment, and @BeetleButch declined to be interviewed.

Not everyone at Chumbosoft agrees with Shepple and her girlfriend. One Heartbeat artist named Sil “cut relations” with Chumbosoft on Sept. 24. The day before, Heartbeat composer Trass tweeted support for trans women “and their rights to call themselves lesbians.”

“Working with a friend doesn’t mean I agree with all of their views,” Trass tweeted. “Also, the other devs don’t share the same view. Plus I didn’t know anything about this when I was working with her.”

Shepple and Nikotine’s beliefs still sting, in part because Heartbeat’s compassionate message resonated with the trans community. Games writer and Heartbeat Discord member Luka Étoile wrote a blog post mourning her relationship with the game, saying her passion for it “was completely wasted.”

“That I spent so much time and effort playing the game, listening to its soundtrack, writing about it, telling people about it, spreading the word about it because I loved it and its message and its characters so much that I wanted everyone else to experience it… for no reason or, worse, to eventually have people put money in the pockets of people that would rather I didn’t exist,” Étoile wrote. “It’s likely something that I’m going to wrestle with for the rest of the week, as pessimistic and cynical as I am.”

Étoile told the Daily Dot that Shepple’s behavior has caused “pretty much universal” shock and heartache among Heartbeat’s trans fans.

“Considering the fact that the lead developer on the game, Shepple, hasn’t tweeted since all of this broke and, as far as I am aware, is the only person who COULD have set the sale price, I’m not holding my breath for an apology,” Étoile said.