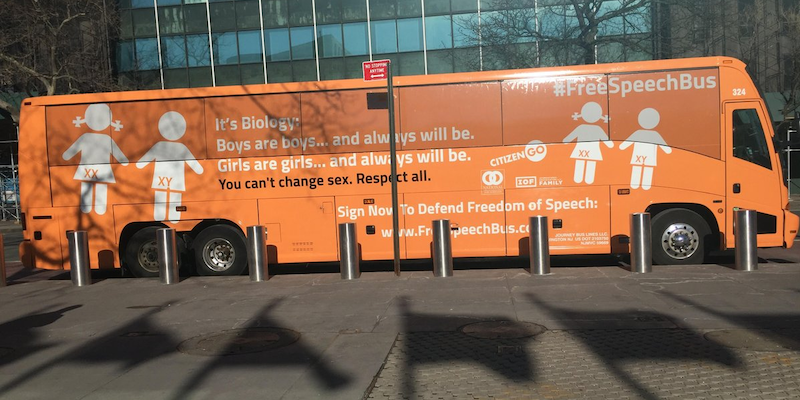 A transphobic bus banned from Madrid has now reached the United States, with New Yorkers spotting the bus parked outside the United Nations on Wednesday.

“It’s Biology: Boys are boys… and always will be. Girls are girls… and always will be,” the side of the bus reads. “You can’t change sex. Respect all.” The bus is also adorned with stick figure boys and girls who are marked with XY and XX chromosomes, along with a call to action to sign up at the bus’s official website.

The orange bus, which looks exactly like its Spanish counterpart, is called the “Free Speech Bus” in the U.S. The bus was created thanks to a partnership between the National Organization for Marriage, International Organization for the Family, and the bus’s main sponsor, a conservative online activist website named CitizenGo. The bus’s website redirects to CitizenGo’s U.S. office, which is located in Washington, D.C.

CitizenGO’s campaigns director, Gregory Mertz, told the Daily Dot that the bus will be touring New York City until Friday in an attempt to spread the bus’s message during the United Nations’ Commission on the Status of Women. Mertz explained that the bus’s sponsors are upset about the commission’s support for trans-inclusive lesson plans in worldwide sex education curriculum.

“Instead of finding solutions to eradicate poverty and hunger, improve health and education, and produce clean water, which are among the most vital needs of women and girls in less fortunate nations, member states are discussing how to mandate comprehensive sexuality education to children as young as 4 years of age, which includes the teaching of gender ideology,” Mertz told the Daily Dot in an official statement.

Originally, CitizenGO was planning a much more explicit message for the bus’s U.S. campaign. Replying to a March 1 tweet from Chelsea Clinton, the bus originally planned to say, “Boys have penises. Girls have vaginas. Don’t be deceived.” The wording was later changed to much more conceptual language about gender identity.

According to Mertz, the bus will tour the following locations in the coming weeks ahead:

Talking to BuzzFeedNews, the National Organization for Marriage spokesperson Joseph Grabowski said it hopes cisgender people will complain about transgender bathroom access in progressive cities thanks to the bus tour.

“[Transgender people] are a small segment of the population, with a disorder, that has quite a big megaphone for the demographic it represents,” he told BuzzFeed News. “This is not about live-and-let-live. This is about what is best for the common welfare of society.”

Update March 24, 8:20am CT: The “Free Speech Bus” was vandalized on Thursday, Brian Brown, president of the National Organization for Marriage, told USA Today. He said two people approached the bus as it was parked near the U.N., keyed it, cracked the windows with a hammer, and spray-painted “Trans Liberation.” The driver tried to protect the bus but was tackled to the ground by one of the vandals. He wasn’t hurt. NYPD is investigating the incident.