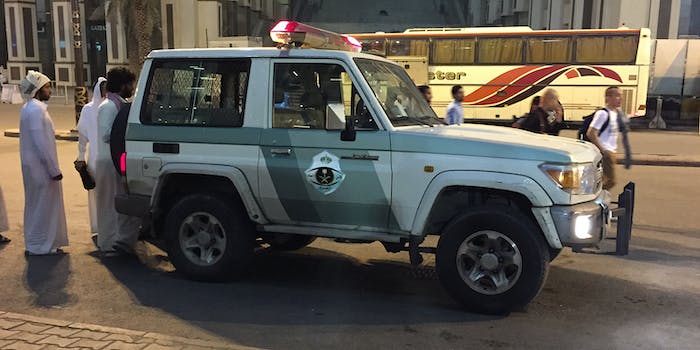 Two transgender Pakistanis were tortured to death in Saudi Arabia, leading LGBTQ activists across the globe to demand answers from the nation.

One transgender citizen living in Saudi Arabia said that Amna and Meeno were arrested on account of Saudi laws on cross-dressing and same-sex relationships. The raid took place during a “Guru Chela Chalan” celebration, in which the Pakistani trans community chooses a “guru” leader to lead the community.

According to Qamar Naseem, an activist from transgender rights group Trans Action KIP, the two transgender Pakistanis were “kicked and beaten in bags,” the Independent reports.

“Torturing humans after throwing them into bags and beating them with sticks is inhumane,” Naseem told the Express Tribune. He also warned that the other 22 transgender victims are still being held in police custody. “No one is there to save them as the life of a transgender is not of any value to anyone, not even for our own government,” he said.

One transgender woman, Farzana, warned that the Saudi government would not allow trans people to perform the annual pilgrimage to Mecca, “Hajj,” as well as the “Umrah” pilgrimage. For transgender Muslims, this is considered inhumane: Hajj is an annual religious pilgrimage that all Muslims must partake at least once in their life. Umrah, meanwhile, is considered the “lesser pilgrimage” to the Grand Mosque—and one which Muslims can take at any time of the year.

Confusion exists regarding whether transgender Muslims can receive a visa for Hajj and Umrah. In 2016, media reports revealed a Saudi Consul General told the Travel Agents Association of Pakistan to deny visas to any transgender persons attempting to partake in the Umrah pilgrimage. The TAAP denies receiving any such notifications from the government, and the Saudi embassy in Islamabad also rejected such claims.

“There is no truth in reports that Saudi Arabia has barred transgenders from going to the holy land for pilgrimage,” an official statement from the embassy said, SAMAA TV reports.

As mixed signals persist, activists and Islamic theologists alike fear that the Saudi government is infringing on the basic human rights of transgender citizens and Muslims. Religious scholar Javed Ahmed Ghamidi notes that the Saudi government doesn’t have the authority to determine who does and does not access the Muslim holy sites. Rather, Ghamidi stresses that transgender people have a long legacy that dates back to living alongside the Prophet Muhammad in Madina.

“During Ottoman rule, transgender people were part of the administration of Masjid-e-Nabvi and were responsible for opening and closing different doors and cleaning the holy mosque,” Ghamidi told the Express Tribune. “It is the house of God and everyone should be allowed to come and see it; there is no reason to stop anybody.”