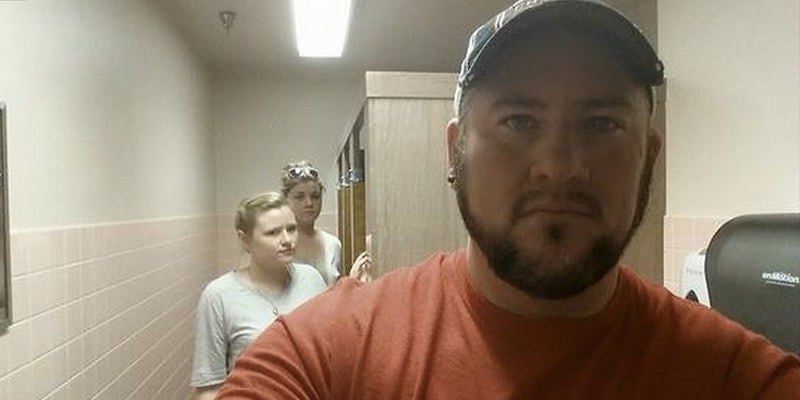 A slew of proposed laws require that trans teens use bathrooms according to their assigned gender.

Michael Hughes, a transgender man from Rochester, Minn., uses the men’s room. But a recently proposed state law dictates that high school students in Minnesota will have to use bathrooms according to their assigned gender at birth, and that’s a big concern for trans people in the North Star State.

As a teen, “just going to the bathroom in high school was a nightmare for me,” Hughes told local station KTTC. “I would get nauseous just at the thought of having to go.”

So he’s fighting back by heading to the women’s restroom instead, tweeting a mirror selfie with a friend alongside a brief caption and the hashtag #Occupotty.

Minnesota is not the only state to usher in legislation requiring that people use restrooms according to their birth sex. Florida and Texas have introduced similar bills, and the Canadian Senate recently passed an amendment requiring trans people to use restrooms in accordance with their assigned gender rather than their gender identity. Sen. Donald Plett, who authored the legislation, told the Times Colonist that it was intended to protect vulnerable women from having to share a space with someone who is “biologically male.”

Those who are directly affected by the bill, however, don’t quite agree that Sen. Plett’s amendment is magnanimous toward trans people. “[The amendment] is actually giving predators a chance and an opportunity. People think, ‘Why’s this girl in the washroom? She must be looking for a guy,’” 23-year-old trans woman Brae Carnes told the Times Colonist.

Carnes kicked off a bathroom-selfie hashtag campaign, prompting trans people to tweet selfies in men’s restrooms with the hashtag #PlettPutMeHere and #WeJustNeedToPee.

Now Hughes wants to organize a protest at the state capitol as well as a more formal photoshoot in a women’s restroom. He hopes his hashtag campaign will help lawmakers understand how important it is for trans people to have their own safe spaces and use their restrooms of choice. “I’m hoping that even the most conservative lawmakers and voters will be able to look at them, take a step back,” he told KTTC.