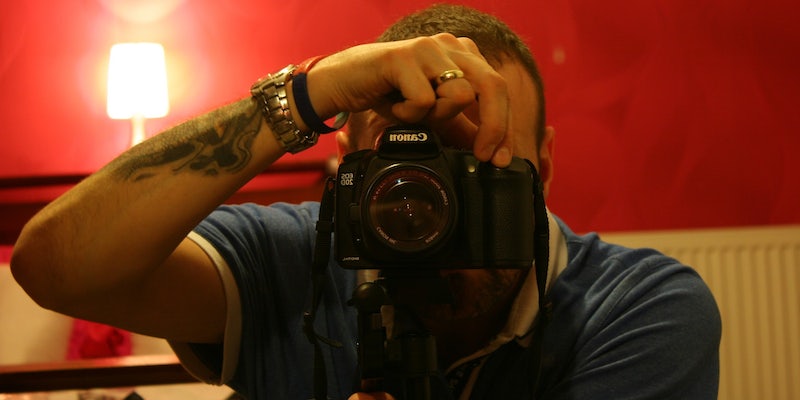 In the queer community, selfies are about visibility, not validation

“We need these resources just to feel like we have a chance of moving forward.”

What does it mean to see people who look like you on the Internet? For Frances Locke, it was a means of survival.

Taking selfies helped Locke, a blogger for The Gloss, cope with body issues—from battling an eating disorder to dealing with sexual assault. It was a “constant battle to keep [her] self-loathing in check,” she wrote. But as Locke worked through her trauma, she found a digital community of other women who were dealing with the same thing.

“In the face of overwhelming stress in the wake of this event, I was constantly tempted to see myself as disgusting and unworthy,” Locke said. “Seeing other women, many of whom have gone through the same thing, post pictures of themselves [that] they were proud of made me feel just a little better about myself.”

Selfies are having a big moment. The term, which first appeared in Australia in 2002, beat out twerk for the honor of Oxford Dictionary Online’s word of the year. But there’s nothing bigger than the role it plays in peoples’ lives.

The selfie is not without its critics. Jezebel argued that the trend was disempowering and a “cry for help”; Gawker has taken a cynical stance, calling “funeral selfies” narcissistic. But Salon’s Tracy Clark-Flory argued that selfies play a crucial role in affirming our very humanity. “These are attempts at chasing the feeling of being fully alive,” Flory writes.

In an article for In These Times last month, Yasmin Nair explored the pervasiveness of selfie culture among queer people. The age of social media has allowed LGBT folks to share their experiences over social media, as a way to document their lives. While that can be liberating for some, “affirmation comes with normative strings attached,” creating “hierarchies of beauty,” Nair argues.

To explore the body politics of this selfie debate, I spoke to Stevie Hnilicka, a genderqueer performance artist in Chicago who frequently posts pictures of herself on social media. Hnilicka agrees that our culture of affirmation can be damaging for some who don’t fit “queer beauty norms”—or what Nair calls “the tyranny of fashion.” It has the potential to lead to a culture where some are left out or policed.

“These hierarchies exist at many levels,” Hnilicka says. “After all, selfies aren’t just a queer thing.” Hnilicka mentioned Hot or Not, the website and application that allows users to rank each others’ attractiveness, as a means to browse or get connected. “This was the ultimate straight selfie moment,” Hnilicka says.

Having people on the internet quantify each other’s attractiveness can be damaging, as we often “focus on negative reactions.” However, for Hnilicka, it’s about moving past the need for validation. Instead it’s about visibility.

“That’s one of the great things about selfies,” Hnilicka says. “It’s a self-portrait, seeing yourself and people like yourself in various forms of artwork. As a fat person, I think that was really huge for me to see other fat people on Tumblr. Being part of a marginalized group feels a little lonely sometimes, and seeing people like yourself makes it easier to be yourself.”

For Stevie Hnilicka, these digital images are not only a form of resistance, but also a way to try on new identities. Hnilicka has been posting pictures of herself throughout her process of coming to terms with her gender identity, and the Internet gave her a means of working that out. Hnilicka will often share photos of different looks she put together—Willow from Buffy the Vampire Slayer, or Kathy Bates.

“It’s a tool of costuming,” Hnilicka argues, “but I think it’s made being in actual spaces a little easier.”

For Parker Marie Molloy, selfies have been an integral part of her transition. Molloy, a writer for the Huffington Post and Rolling Stone, posted the first picture of herself online two months after she came out, “as a way to keep track of my progress.

“If I wasn’t taking pictures to document this,” Molloy says, “I might not be sure it was happening.”

Molloy claims that it wasn’t just an important first step in facing her fears of judgment. Posting selfies helped her find herself, the person she knows she was born to be.

“It was important to receive positive feedback to keep convincing me that I was doing the right thing, that I wasn’t making a mistake and that I wouldn’t look like my worst fears,” Molloy says. “There are still many days where I wake up and I’m hit with some dysphoria related to my appearance, and selfies are a good way to snap out of that. The same issues that I had when I started my transition stuck around.”

Toni D’orsay, executive director of This Is How and a cofounder of the Trans 100, claimed that these communities of affirmation can be a tool to help transgender people exist in the world. This is whether it’s liking someone’s picture on Facebook or trading makeup tips in a trans-friendly subreddit. “We need these resources just to feel like we have a chance of moving forward,” says D’orsay. This culture can be difficult for those who don’t have the ability to “pass”—a term that means the person isn’t viewed as transgender by those who don’t know them. It’s a problematic concept, but, D’orsay argues, “the purpose [of] passing is to find a way to escape the greater problems of social anxiety and social aversion to trans people.”

“If you pass, the notion is that you have it ‘easier,’” D’orsay explains. “You can get all theoretical, but it’s true. If you meet those standards, you have an simpler time in many ways. In the long run, this hurts us, but when you’re just starting your transition, that doesn’t matter.”

This doesn’t mean transgender and queer people shouldn’t post selfies, but that the community needs more kinds of selfies—from everybody.