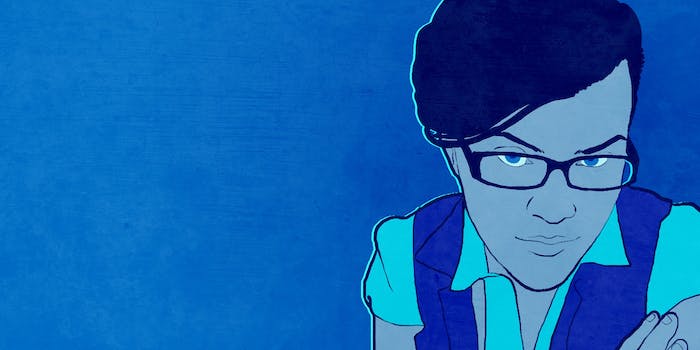 Because smothering indifference does not equal 'liberation from pain and vulnerability.'

And now we go live to a queer trans woman to get her perspective on the atrocity that has befallen Orlando’s queer community.

Well, Todd, I’ve been staring out the window of my local queer bar at the warm, welcoming abyss that is the surrounding neighborhood bereft of all life or foot traffic on a Sunday night, and I’ve come to realize that this numbness is not a feeling, per se. This smothering indifference to the notion that I could one day witness anti-queer violence with even a degree of shock or outrage is just a part of me now. This indifference has been baked into me, like a seasoned cast-iron skillet. Did you know they give cast-iron skillets as wedding gifts?

Well, at straight people weddings. At most queer weddings I’ve gone to, no one has money for gifts, and everyone just holds each other and thinks, “I really, really hope none of the pictures taken here have to be used for a memorial slideshow after someone here has been murdered by a straight person.”

I want to cry. I see everyone at the vigil crying and holding each other and I’m so, so jealous of their ability to cry. Because I have to, Todd. I have to learn how to cry again.

You were at a vigil? Do you think these massive shows of solidarity will galvanize public opinion?

We can’t even get people to admit that queer people were the targets of the shooting. And who comes to these vigils? Who’s there to “keep us safe”? Cops. As recent as 2014, 14 percent of LGBT people surveyed in the U.S. have reported being harassed by the police; 3 percent reported being sexually harassed by the police. And most of those people being harassed were people of color and identified as transgender. And lo and behold, who was featured on the flyer for Pulse?

They don't want y'all to know who was really being targeted in Orlando but this is the flyer. #BlackTransLivesMatter pic.twitter.com/7J7ll8OVn9

So, you have trans people of color at an event where there are armed cops surrounding the crowd and white activists are urging people not to respond with anger (which is what happened at the vigil I attended). The kind of public opinion that “galvanizes” isn’t beneficial to them. The queer people of color and trans people have long been left out of the public discourse on gay liberation time and time again.

They’re just trying to warn you to stay safe and let the authorities handle it.

No, my man: They’re not talking to me. My numbness has been accounted for. As has the indifference of countless white LGBT folk who’ve been so steadily indoctrinated to violence that this very blatant shifting of blame for these attacks, from homophobia to Islam, to justify further conflict with Muslims at home and abroad, can be expected to go unchallenged or even unremarked.

Well you have to admit, that certain sects of Islam—

“Muslims are not and will never be my enemy. They have always been there, with me and for me—as corroborators, as comrades, friends, and partners.”

And I don’t care how high you stack the bodies of my brothers and sisters and those beyond and in between the binary; you will never compel me to fight them on your behalf because you found your fear of them a suitable smokescreen to sidestep the ownership of so many lifetimes of violence against trans and queer people in this country.

I don’t think there’s an agenda here; we’re just reporting the facts, and the facts are that Omar Marteen was brown and had a non-Anglo-Saxon name and killed many people at a gar bar and we need to make sense of that. Invoking a vast conspiracy to wage war on Islam will not bring healing to this community.

But you don’t provide round-the-clock coverage when it’s another white, cisgender, heterosexual white man who kills a queer person. You don’t fill up that ticker tape whenever the perpetrator is a police officer, who either assaults a queer person or lets them die through their neglect.

Hillary Clinton wants to get back to “the spirit of 9/12.” Ask the Muslims living in this country what that means to them. It doesn’t invoke setting aside differences and coming together as a nation. Ask those who’ve lost loved ones in the Orlando shooting, who can be legally fired in their state for being openly queer, if building a mountain of innocent bodies will make them whole again.

This is why I can’t give in to the numbness, Todd. In my numbness, I am a tool, I am a membrane through which a dagger can pass through to get at those with less privilege than me. If I allow myself to become insulated and withdrawn from the constant barrage of butchery, then I give you consent to kill in my periphery.

I must resist this. I will undoubtedly fail, I will falter, I will parrot your violence and rationale for injustice without thinking. I will fall astray to the temptations of being a “model,” a “savior,” to speak over and out of turn. I want this to be about me; I want to, in some way, be rewarded for not being able to bring myself to care, just as so many other white assimilationist progressives have before me (and undoubtedly will in the aftermath of this event). That numbness, baked into me over decades, is like a Maillard reaction of white privilege and supremacy.

“That pervading numbness that allows us to feel nothing when people within our own or other marginalized communities are hurt or killed—it is not a liberation from pain and vulnerability. It is just another bar in another person’s cage.”

This indifference toward the other isn’t just a feeling; it’s deep within me, and I must resist it, every day until I die (which could, statistically, be at the hands of a heterosexual, cisgender man).

I can’t let this be about me. I must self-cannibalize; I must allow myself to feel anger, disgust, outrage, and fear the horrors I see. And then I must move toward them.

We as queer people cannot allow the violence enabled by a patriarchal, queerphobic, racist, imperialist society be used to justify violence against non-white people, at home or abroad. We have struggled too long and too hard against police violence, indifference from politicians, and exploitation from the media to settle for being the disdained martyrs of the next stage of anti-brown extermination.

So, uh, any advice you can give to the community in their time of need?

That pervading numbness that allows us to feel nothing when people within our own or other marginalized communities are hurt or killed—it is not a liberation from pain and vulnerability. It is just another bar in another person’s cage.

Fight back against this spiritual neuropathy. This is really all I, as a white radical, can say to other white people in my community in terms of instruction on liberation; the actual nuts and bolts of the long game of fighting back must be entrusted to people of color.

But if you want to protest the presence of military recruitment booths at pride celebrations, or write your congressperson to demand direct actions be taken so that the Orlando tragedy isn’t justified to send out more drones and troops and police to violate and kill Muslims—that can’t hurt.

Back to you, Todd.

Jetta Rae is a queer trans woman out of Oakland, California. She runs the intersectional food blog FRY HAVOC and drunkenly livestreams pinball as radical praxis. You can find her on Twitter at @jetta_rae.