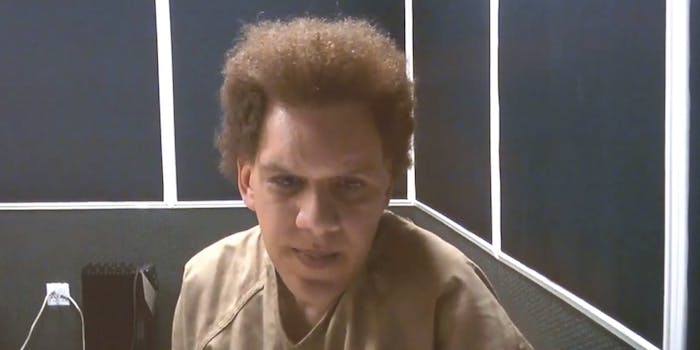 Will a single incident be used against the trans community?

An 18-year-old woman in Idaho called police Monday to report that she had been changing into a swimsuit in the Target dressing room when someone she described as “a male wearing women’s clothing” reached over the barrier from the next stall to snap cell phone photos of her.

Sgt. Bryan Lovell, a spokesperson for the Bonneville County Sheriff’s Office, told the Daily Dot that detectives tracked the offender down after they fled from the Target in Ammon, a suburb of Idaho Falls. Using witness testimony, the alleged voyeur’s cell phone, and Target surveillance video, they determined that a crime had indeed occurred.

Shauna Patricia Smith, 43, told detectives that she identifies as a transgender woman. She has not completed a legal name change and was booked under a different name.

“I don’t know if this is a new thing, or a scheme to dress like a woman to get naked pictures of another woman or what,” said Lovell in response to the Daily Dot asking whether there was a possibility the incident was a prank related to recent increases in anti-LGBT activism directed at Target.

“We’re investigating a crime and we’re sensitive to when someone wants to be called something other than their given name,” Lovell said. “Ultimately, this crime happens across the U.S., whether someone is transgender or not.”

In a video posted by the East Idaho News, Smith is seen being arraigned via video and receiving a felony charge of voyeurism. She is quiet and calm throughout the video, responding with a short “Yes, sir” when asked if she had correctly applied for a public defender—and when she is repeatedly referred to as Mr. Smith.

According to court documents obtained by the East Idaho News, Smith told detectives “that she had made videos in the past of women undressing. The defendant told (the detective) that she makes these videos for the ‘same reason men go online to look at pornography.'”

The Daily Dot spoke with Emilie Jackson-Edney, a volunteer with The Community Center (TCC) of Idaho, an LGBT center where she has facilitated a transgender support group for 12 years. Jackson-Edney said that she had been speaking with members of the transgender community across the state but had not encountered anyone who knew Smith personally. Smith, though, had once contacted the facilitator of an Idaho Falls trans support group.

“Certainly it’s upsetting to me and virtually everyone in the trans community,” said Jackson-Edney. “It’s something that we don’t condone, and it’s something that certainly could be exploited by those who are against all things LGBT.”

“Many trans people are struggling and in severe clinical depression, sometimes suicidal,” she said. “They think they’re the only person in the world like them and have been closeted for so long.”

Idaho’s transgender community has lobbied hard for rights in recent years, with 13 cities, including Idaho Falls, passing nondiscrimination ordinances. Like many transgender rights advocates around the country, Jackson-Edney said she was worried about the backlash the outlying incident could cause—and the ways it could be exploited by conservative politicians who are already trying to pass laws that make basic life functions, such as using the bathroom, difficult for trans people.

“There are 1.4 million trans people in this country. One person doesn’t mean you should exploit the whole community,” said Jackson-Edney, who testified before the Idaho House State Affairs Committee in February 2015 in an effort to have sexual orientation and gender identity added to the state’s human rights act.

It’s a vulnerable time to be a trans activist in a state as red as Idaho, and it’s unclear whether the Target incident will upset the delicate balance that advocates have achieved with tireless activism.

“Transgender people are a target now,” Jackson-Edney told the Daily Dot. “It really has nothing to do with bathrooms, but with organizations and politicians trying to criminalize being transgender—trying to legislate us out of existence.”