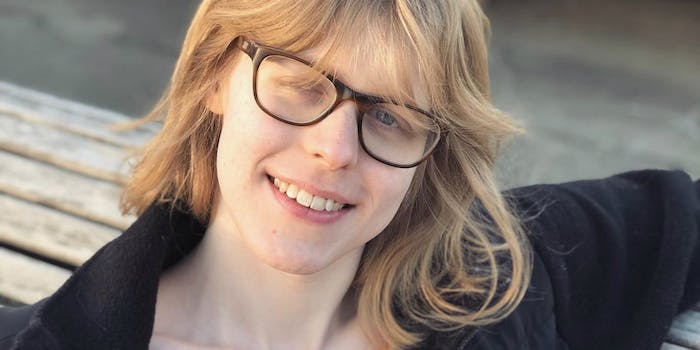 If there were no cis people in the world for 24 hours, here’s what I would do

Everyday life is difficult for trans women. I should know.

For the past week, I haven’t stopped thinking about this tweet: “Trans people, imagine that for 24 hours, there were no cis people in the world. No cis folks are being harmed, they will all return. They are safe and happy wherever they are during this hypothetical time period. What would or could you do that day?” wrote Twitter user @QueerGirlEmilie.

It’s a question that hits home hard. There’s so much I would do, @QueerGirlEmilie. Where should I even start?

Let me explain a bit about myself first. I’m a 24-year-old white, lower-middle-class trans woman. I transitioned three years ago, and, for the most part, I haven’t been misgendered in public since my first few months on HRT. My voice, face, figure, and sense of style all help me pass. Granted, I have a certain level of privilege as a trans woman for that reason: I can walk into the women’s restroom without question, or call up my bank over the phone and get gendered correctly.

But passing for a cisgender woman doesn’t make me one. As a trans woman, it’s still unsafe for me to be out in the world. All it takes is being in the wrong place at the wrong time for something particularly dangerous to happen.

For one, when I walk down the street during the warmer months, men ogle me, make passing comments at me, even put their arms around me. That’s not all that different than what my cis girlfriends experience.

But facing sexual harassment as a trans woman who passes is a little more complicated. Generally speaking, cisgender people on the street assume “woman” means “cisgender woman.” That means strangers subconsciously (and consciously) think that I have a vagina, even though I’m non-op (that is to say, I have a penis, which I call my clit, and I have no plans to ever get rid of it). My biggest fear by far is being sexually assaulted by a cisgender man who doesn’t realize I have a penis. Not would that only out me as transgender to a violent predator, it may cause him to become blinded with rage, and I could see myself becoming seriously injured or worse because of his insecurities.

For the record, this is a very real anxiety I’ve had to face first-hand. In 2016, I was riding a crowded L train from 14th Street to Brooklyn wearing a short, sleeveless dress. A middle-aged man hopped in behind me, ran his hands down my sides, and groped my hips and ass. By the time I noticed what he was doing, he seemed to be reaching around to the bottom of my rear end, as if he planned to snake his fingers between my thighs, to my crotch. He ducked out of the car after I caught him in the act, but I felt humiliated, violated, and frightened. I was scared that if his hands reached my front, he would find out I was trans. Hell, I felt anxious the entire ride to Brooklyn, worrying his shuffling hands caused my dress to wrap around my clit and he had outed me to others.

Granted, I don’t think I would be entirely safe in a world where cisgender people went away for 24 hours. Trans men and trans masc people certainly can be abusive; anyone can, really. But I definitely feel much, much safer around trans men and trans masc folks than cis men. There’s a sense of kinship and empathy that’s shared between trans women and other trans folks because our life stories and struggles are similar. Not to mention, transitioning often encourages trans men and trans masc people to question their privilege, scrutinize masculine gender roles, and challenge toxic masculinity. Generally speaking, I would feel so much more comfortable doing things like taking a late-night walk, going out to a party in the early morning hours, or hanging out with random strangers if I only had to share the world with other trans folks for a day.

That’s not all. As a trans woman, I’m often forced to hide my transness from the world to protect myself from harassment and violence. Around other trans women, I’m snarky, extroverted, and a little bit flirty. I make jokes about topping and bottoming, popping estrogen, and forced feminization. I’d never do that around cis people. It’s not just that I code-switch between trans friends and cis friends; I try to take up less space around cis people out of fear of saying the wrong thing and being clocked as trans.

Things would be very different if cis people were gone from the world for 24 hours. I could wear whatever I want, run around joking about being trans publicly, stay up drinking with other trans girls, or take my girlfriend to Prospect Park and kiss on the hiking trails through the forests. Without cis people in the world, I could express myself safely and openly because my transness wouldn’t become a confusing spectacle. It would just be a given.

Then there’s my mental health, which would improve so, so much. As a trans woman, I deal with a lot of depression, social anxiety, and dysphoria. Some days it’s hard to even leave the house. And even on the good days, when I’m out and about in the world, being the only trans person at a party, a diner, or even my coworking space can feel lonely and isolating. It’s like living on a distant planet. Not to mention, it’s hard to know who has my back if I’m outed as trans.

But being surrounded by trans people for a day would melt away all of that stress, anxiety, and isolation. No matter where I went to—be it a party or a church or a college classroom—I know I would be surrounded by people that empathize with me, feel connected to me, and understand my life’s struggles. I don’t have to be in a room of close friends; I just have to be among other trans people to feel seen, supported, and loved.

Oh god. Here we go:
1) I would be SO less socially anxious. I could just go out of the house and grab a drink or get a bagel or w/e, probably even walk around late at night at any time https://t.co/fjnQaqjh0C

2) Openly and freely talk about trans shit with other trans girls without worrying about cis people overhearing & asking questions/freaking out.
3) PDA with my gf anywhere and any time.
4) No awkward stares or questions when showing my ID at a bar.
5) No tucking baby!!

Tears are in my eyes right now. What a heartbreaking thread of humans just wanting to be human but cant.

As a cisfolk, know you're got an ally and would literally step the fuck up for you. Rock your fucking cuteass bikini and Ill take care of the rest

Cis people – read this thread for an insight into the privileges we have and experience as cisgender members of society, cruelly barred and withheld from so many trans people through the societal bigotry aimed at curtailing the existence and livelihoods of trans people. https://t.co/pTV1pmGUTt

Obviously, I wouldn’t want to live in a world where cis people don’t exist. I love my cis friends and my cis coworkers. The problem isn’t with them. Rather, our society assumes cis people are the default. We treat them as the norm, and anything less than that is considered freakish or perverted. That gives cis people the power to harm trans people and silence our voices, quite literally at times.

That’s the real power of @QueerGirlEmilie’s tweet: It gives trans people the platform they need to share their daily life struggles with one another, and it shows cis people just how dangerous it is to live as a trans person in the world today. Whether it’s going to the bathroom without harassment or getting the chance to kiss our lovers late at night, trans people have to make so many sacrifices just to stay safe. Now more than ever, it’s time to show the world that we deserve the same rights cis people have, even if it’s as simple as wearing a bikini to the beach without fear.