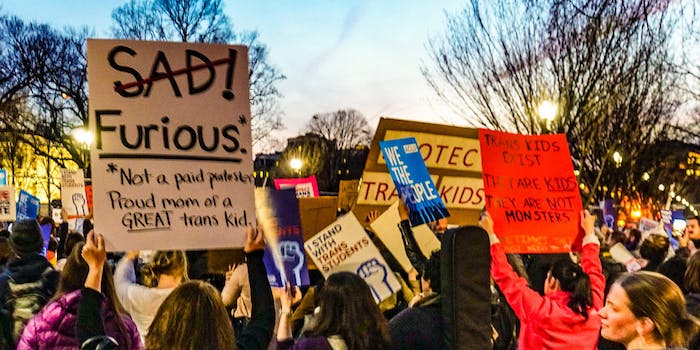 Transgender child has been reportedly ‘medically kidnapped’ by faith-based hospital

The ACLU is looking into the case.

The American Civil Liberties Union, Lambda Legal, and the National Center for Lesbian Rights are concerned that a Christian-based hospital is denying a five-year-old trans girl the opportunity to present as a girl.

News originally broke after transgender advocate Kathy Blazer-Williams‘s Facebook post about an anonymous family with a transgender daughter named Stevie went viral. Stevie, who has type 1 diabetes and is epileptic, was taken by the Advocate Children’s Hospital in Oak Lawn, Illinois, from Stevie’s parents. The hospital reportedly trimmed her hair and took away her clothes and toys. Throughout Stevie’s stay, the hospital has allegedly misgendered her and has failed to address her by her chosen name, only giving her boy toys and referring to her as a boy.

LGBTQ Nation provides further context about the situation. The family’s lawyer states that Stevie’s parents agreed to a “therapeutic separation” due to Stevie’s ongoing medical concerns. However, the parents engaged in this treatment specifically for medical care unrelated to Stevie’s gender identity, and they only did so orally. They did not forfeit their parental rights or engage in any form of conversion therapy treatment for Stevie. They have since attempted to move Stevie out of the hospital, but with no luck.

“It was an oral agreement that does not require action by the court until after 30 days,” Blazer-Williams explained to LGBTQ Nation. “Then the Department of Children and Family Service has to go to court for a temporary order to take custody. After that, they have a hearing. The first one was Tuesday but went into continuance. Before that, DCFS did not involve the courts, and they are not legally obligated to.”

Eventually, the Illinois Department of Children and Families decided to take protective custody of Stevie, which means both the DCFS and Stevie’s family will go in front of a judge to decide who will hold custody of Stevie. The American Civil Liberties Union is working with the family’s lawyer.

However, the DCFS states that they did not attempt to challenge Stevie’s gender identity, nor did they hope to seek custody of Stevie due to her identity as a transgender girl. “DCFS is seeking temporary custody due to medical issues unrelated to LGBTQ concerns,” department spokeswoman Veronica Resa told LGBTQ Nation. DCFS also noted that the department’s caseworkers are referring to the child as Stevie, and are not misgendering her. “We’re going to be using the name the mother calls the child, whatever that name is. My understanding is all the caseworkers are using what the mother calls the child, whatever that child name is, or their nickname is.”

According to LGBTQ Nation, the ACLU is working with the family’s lawyer on the case. LGBTQ rights organization Lambda Legal and the National Center for Lesbian Rights are also following Stevie’s situation.