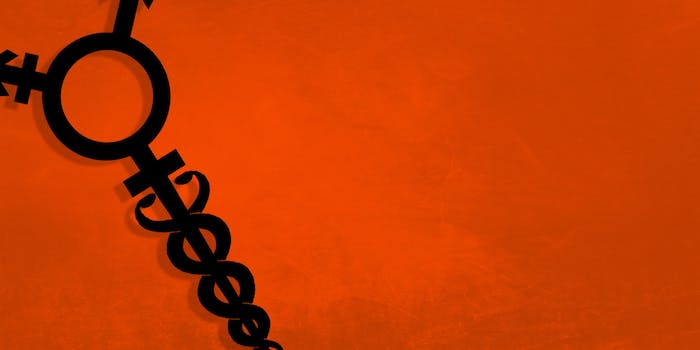 Would a licensed medical doctor with years of training really be unsure of what to do with a broken arm just because it was attached to a transgender person?

That’s the simple question at the heart of a complex issue dubbed “Trans Broken Arm Syndrome.” The term was coined by Naith Payton at British LGBT site Pink News on July 9 to describe when “healthcare providers assume that all medical issues are a result of a person being trans. Everything – from mental health problems to, yes, broken arms.”

This phenomenon is just one of many difficulties transgender people face when seeking healthcare. Even for something as common as a cold, trans people frequently don’t receive appropriate medical care due to a combination of under-educated physicians, insurance coverage denials, and fear of discrimination.

But is Trans Broken Arm Syndrome actually a thing?

Robyn Kanner, of the new healthcare referral site MyTransHealth, shared her personal experience with the Daily Dot via phone. On July 30, Kanner and her partners at MyTransHealth—Amelia, Kade, and Annika—asked followers on Twitter to recall their most discriminatory healthcare experiences using the hashtag #TransHealthFail. The stories flooded in.

Some of the healthcare fails smacked of Trans Broken Arm Syndrome, with trans people being told that health issues ranging from panic attacks to stomach flu were due to their hormones or transgender status. One woman even recalled being given a mandatory pregnancy test—despite the fact that she had no uterus and was physically incapable of pregnancy.

I went to the ER for a stomach bug once, doc asked if I was "making myself sick b/c I'm depressed over being trans" #transhealthfail

Other people shared times they had been discriminated against by medical workers who refused to recognize their gender or tried to refuse them healthcare because of their trans status.

I stepped into the gynecologist's office for my appointment and the receptionist says "you've got the wrong place". #transhealthfail

I had a dentist repeatedly refer to me as "he" to coworkers even though my identity documents say Mia and Female. #TransHealthFail

Kanner told the Daily Dot that many trans people develop anxiety around going to the doctor because of this sort of discrimination detailed. She also recounted her own health scare that actually did stem from being transgender—but not the way you might think.

“I had kidney stones a little while ago and showed up to the hospital in incredible pain,” said Kanner. “After I had to go through all of these questions about my gender and ID and stuff, finally a doctor told me that kidney stones can happen when you hold your pee too much. And that was actually because at the time I wasn’t very comfortable using public bathrooms, so I really was holding my pee all the time.”

Without the harassment and humiliation that can sometimes occur when a trans person enters a shared public bathroom, Kanner likely wouldn’t have been struck by that particular medical condition. And the anxiety caused by discriminatory, inappropriate medical care can make some people shy away from doctors even when they really need one.

“I’m afraid they are going to have the power to take away something that I need,” Kanner said of doctors. “Like I had these stomach issues and I didn’t want to go to the doctor because I was worried that they would blame my stomach problems on my hormones and make me stop taking them. It becomes this thing you build up in your head.”

Jamison Green, president of the World Professional Association for Transgender Health (WPATH), told the Daily Dot that medical care is often a double-edged sword for transgender people: Even if you can find a doctor who doesn’t treat you like a science project, your insurance company might disagree with the doctor’s assessment.

“People do think every little malady that you have is because you’re taking hormones and you should just stop that right now. Which is very untrue,” Green said. “But it’s exacerbated by the exclusions in insurance plans that allow people to do whatever they want.”

Many of the trans people speaking out about their #transhealthfails also addressed struggles with insurance companies over everything ranging from gender reassignment surgery to basic healthcare needs that have nothing to do with gender identity or hormones.

Doc: Get a mammogram and a prostate exam.

Insurance: Pick one, based on whether we have an M or an F on your file.

Insurance will finally cover surgery, but not the hair removal required for surgery – which costs hundreds of $$$. #transhealthfail

"our Dr's rec is to stop testosterone, start on estrogen & birth control" my health insurance's rebuttal to my hysto claim #transhealthfail

WPATH has long fought for insurance companies to stop discriminating against trans people. It’s not just about getting coverage for gender transition procedures and hormones. It’s also about being treated as a human being who gets sick or injured sometimes—not because you’re trans, but because you’re human.

“A colleague of mine was told by the dean of a medical school that there was no way they were going to teach something that isn’t going to be reimbursed by insurance,” said Green.

Medical schools and insurance companies aren’t the only problem: There’s also a dearth of appropriate research on the front end. Most LGBT-focused health research focuses on HIV/AIDS and mental health, and the funding stream requirements leave little room for much-needed study on the long-term health effects of transitioning. While doctors are quick to misdiagnose a transgender person’s case of the mumps as having something to do with hormone therapy, the truth is that even trans-friendly doctors don’t know much about the long-term effects.

Slowly, the cycle of medical ignorance around trans healthcare is being disrupted. Green said WPATH worked with the National Institutes of Health (NIH) for its 2011 LGBT health report, which has already led to funding major research projects like the Pride Study—the first long-term, large-scale study of LGBT health. In May, the NIH announced funding for LGBT health research, with grants going for as much as $400,000 per project.

In the meantime, transgender people continue to find appropriate, respectful medical care the old-fashioned way: through word of mouth. That’s only going to get easier with two new healthcare startups, MyTransHealth and RadRemedy, which allow people to search for medical and mental health providers who come recommended or self-identify as knowledgeable about trans healthcare. At this point, trans healthcare is a mental health-heavy field with a problematically small population of physicians.

Organizations like WPATH continue to push for more doctor education, and transgender health summits in places like Philadelphia and Oakland, California, to create opportunities for professionals to engage with the communities they serve. Clinics that specialize in LGBT healthcare—like New York’s Callen-Lorde and San Francisco’s Center of Excellence for Transgender Health—take up the slack.

“Doctors are accustomed to being experts, to knowing everything, and when they confront something that confuses them, they feel like they’ve lost control and can’t function,” said Green, advocating for more LGBT health education among providers.

“But I also think there’s a lot of anti-trans bias in the air we breathe, myths that trans people are crazy or whatever,” he added. “And when they don’t get any further education they react out of ignorance.”