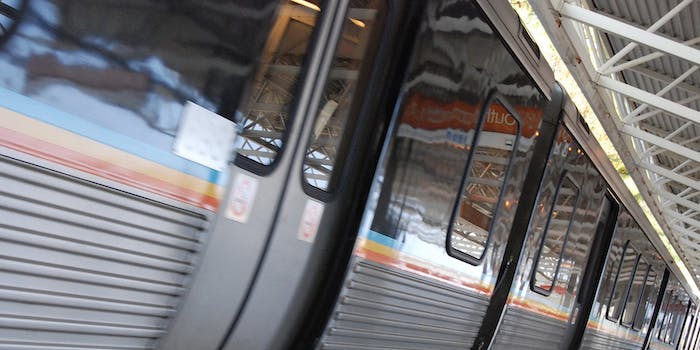 Janell Crosby and Tyra Woods were attacked on an Atlanta MARTA train. No one did anything to stop it.

Today, in news that’ll make you want to repeatedly poke yourself in the eye with a coffee stirrer: A video of two transgender women getting physically assaulted on an Atlanta train has gone viral, the GA Voice reports. The stomach-turning video shows the women being attacked by two men while onlookers record the incident on their phone and cheer.

According to Janell Crosby, one of the trans women who was attacked, the incident took place a week ago on a Metropolitan Atlanta Rapid Transit Authority (MARTA) train. The video shows a male passenger verbally abusing the women before kicking Crosby. When Crosby’s friend Tyra Woods steps in to defend her, she is attacked and stripped naked by another man.

This is a censored version of the video:

FYI, the Atlanta MARTA’s slogan is “Ride With Respect.”

“Nobody tried to help,” Crosby told the GA Voice earlier this week. “They were all standing on chairs and taping.” Although Crosby claims she tried to file a report with a MARTA police officer afterward, she says he had no interest in helping her: “He acted like he didn’t want to hear from us. He didn’t write any statement or anything,” she says.

In the week following the incident, the video has been posted on Flyvidz and a number of other websites. Both Woods and Crosby have left Atlanta, citing safety concerns; they’re currently staying at home with family. The two male assailants, whose faces are visible in the video, have not yet been identified by Atlanta police.

Luckily, it appears that there’s one silver lining to this terrible incident: The video of the attack on Crosby and Woods has prompted an outcry on social media, with trans activists tweeting messages of support for the two women.

A local church has scheduled a town hall meeting to address the issue of discrimination against the trans community. Atlanta mayor Kasim Reed has also publicly condemned the attack, promising a full-scale investigation to “bring those accountable to justice.”

But it’s doubtful Reed’s words are any comfort to Crosby, who says she is uncomfortable with the video of the attack being viewed by so many people. “I really don’t know if people are viewing it for the right thing or to change the situation or laugh at it,” she said. It’s hard to conceive of how anyone can watch the above video and react with anything but horror. But considering Crosby and her friend were brutalized while dozens of people did nothing but point their camera phones and laugh, it’s understandable why she feels this way.