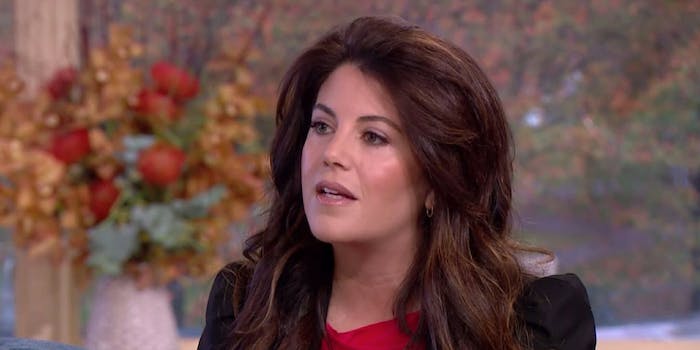 'Town & Country' says its sorry for 'the way the situation was handled.'

On Wednesday, Lewinsky tweeted a note requesting that the world not “invite me to an event ([especially] one about social change) and—then after I’ve accepted—uninvite me because Bill Clinton then decided to attend/was invited.”

She signed the tweet with a peace sign emoji, leaving out specific details of the event, including its host.

dear world:
please don't invite me to an event (esp one about social change) and –then after i've accepted– uninvite me because bill clinton then decided to attend/was invited.
it's 2018.
emily post would def not approve.
✌🏼Me

In a second tweet, however, Lewinsky revealed that the invitation came from a company with a magazine, writing that it had tried to “ameliorate the situation by insulting me with an offer of an article.”

p.s. …and definitely, please don't try to ameliorate the situation by insulting me with an offer of an article in your mag.

Her tweets were vague enough, but happened to be posted on the same day as the Town & Country 2018 Philanthropic Summit at the Hearst Tower in New York, according to the Cut, at which Clinton was in attendance.

Lewinsky’s rescinded invitation wasn’t just a snub, however, nor were her tweets a petty overreaction to be dismissed. By uninviting the former White House intern over the presence of the man who abused his power as the leader of the free world in order to have an imbalanced relationship with her, Town & Country solidified that even in present times, abusive men will always retain their power and be forgiven, while mistreated women will be left in shame.

Several people came to Lewinksy’s defense, instead shaming the magazine for having uninvited her.

It's 2018 and a woman who was sexually preyed on at age 22 over 20 YEARS AGO by a married man in a position of power is still being treated as the bad guy in the situation. Way to go, @TandCmag. Way to support women. #MonicaLewinsky

Disgraceful on the part of @TandCmag. Standing solid with you @MonicaLewinsky https://t.co/ftuESVMlmA

oh hey @TandCmag never will I ever buy your mag again. literally everyone should be better than this and wow are you actually living in this world at this moment? buckets of shame on you. https://t.co/R458o6eix7

3/ Some decent questions for @TandCmag from @JuddApatow, including whether the editors "let their heads of the magazine prey on their interns? Would they disinvite them after abusing their power to get what they wanted from them?"https://t.co/rJLiiIQDU4

On Wednesday evening, Clinton’s press secretary Angel Unreña tweeted that Clinton was unaware of Lewinsky having been invited, then uninvited.

President Clinton was invited to address the Town & Country Philanthropy Summit. He gladly accepted. Neither he nor his staff knew anything about the invitation or it being rescinded. https://t.co/iZ0xtG4OvQ

The magazine responded to its nixing Lewinsky over Clinton by writing a notedly vague, one-sentence apology on Twitter.

“We apologize to Ms. Lewinsky and regret the way the situation was handled,” the statement reads.

We apologize to Ms. Lewinsky and regret the way the situation was handled.

But the publication is apologizing for what exactly? For prioritizing a man who abused his power over the person who suffered his abuse? For not rescinding the invitation with a gift basket instead of a magazine story offer? Who’s to say.