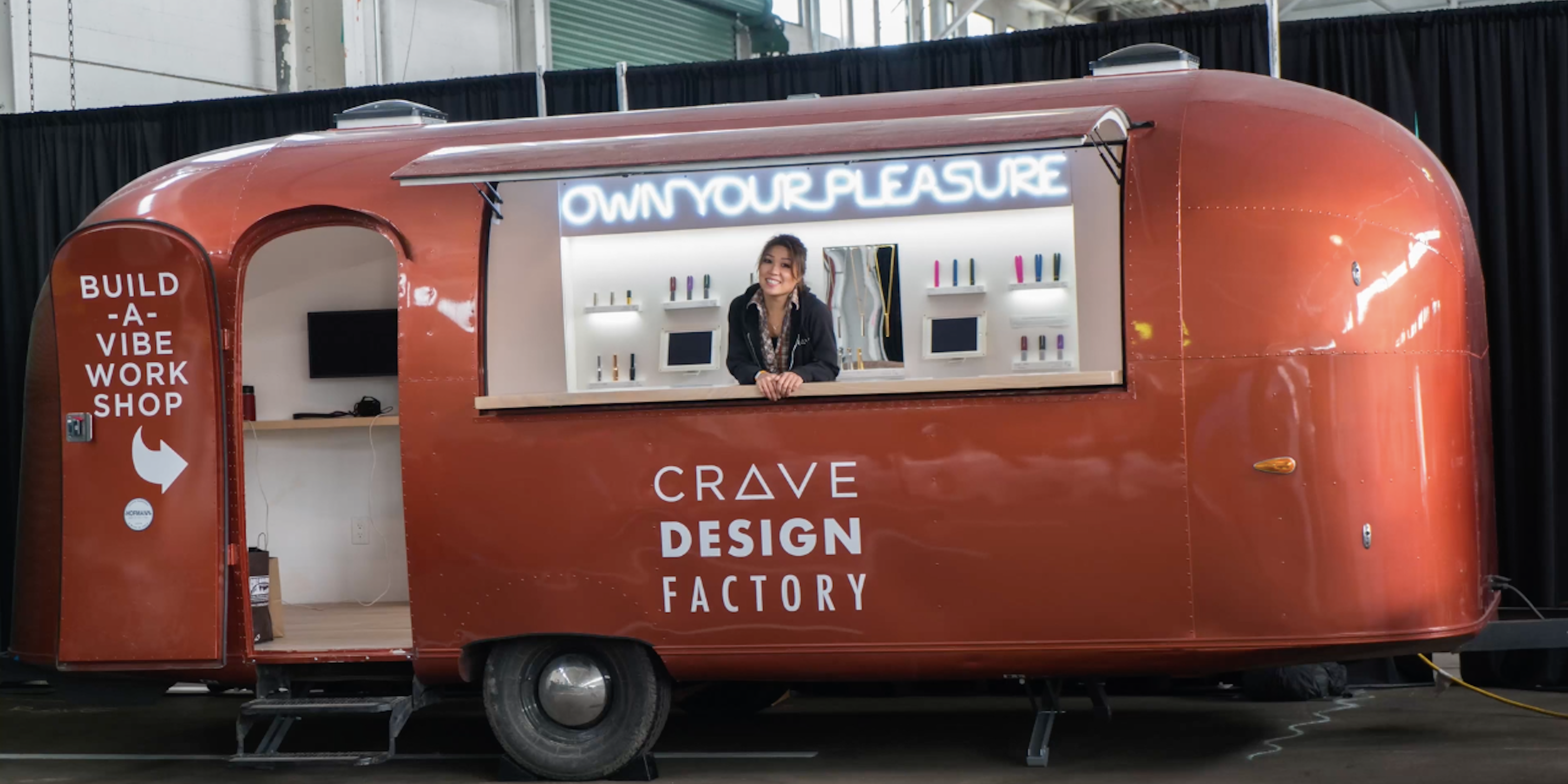 These women-led companies are all about boundaries.

The employees of Unbound have a safe word. If anyone at this sex toy and sexual wellness company feels like a conversation is veering into an area that makes them feel uncomfortable, they can say “Let’s put this on ice,” and the conversation will stop, immediately. Unbound co-founder and CEO Polly Rodriguez tells Bustle that the safe word has only been used a couple of times, but that it’s an important part of their overall sexual harassment policy. Instead of letting boundaries blur, Rodriguez has set up a series of clear rules and guidelines to make sure that her sex company is a place where no one ever experiences sexual harassment.

“It was really important to us to make sure that the workplace environment was always professional,” Rodriguez says. “We are a company first and we have to always look at our teammates through the lens of employer/employee. So we have what could be seen as an insanely strict policy because we want to make sure that everyone always feels safe.”

In conjunction with the safe word, Unbound has a strict rule against talking about personal sexual experiences in the workplace — even experiences with the products they sell. While they obviously have to talk about things that would be inappropriate in most corporate settings — things like anatomy and orgasms and, yes, sex acts — Unbound employees know to talk about them in the abstract or in the third person.

Luxury sex toy brand Crave also has a clear policy about the sharing of personal experiences in the workplace. “We talk about sex,” Ti Chang, co-founder and VP of Design, tells Bustle. “We talk about sex toys, obviously, because this is a sex toy company. But we will never, ever, ever ask you directly, ‘What is your experience? What is your sex life like?’ We let people know that they’re welcome to share, if they feel comfortable, but we will never ask directly about that.”

For when the safe word isn’t enough or people do step over the line, Unbound has an online complaint form. Employees can choose to submit complaints anonymously or with their name attached. Rodriguez says that the form hasn’t been used yet, but that her employees know that any complaints will be dealt with within 24 hours.

Unbound and Crave’s clear sexual harassment policies stand out in the current #MeToo environment, a movement which has been around for over 10 years but recently went viral after a slew of sexual harassment allegations in Hollywood, and then spread to encompass women in virtually every industry. Many employers are even reporting increases in sexual harassment complaints, as people feel empowered to speak up.

Dealing With Outside Sexual Harassment

While both Unbound and Crave have clear rules and boundaries within their company, they can’t control what happens outside their office walls. But that doesn’t mean they haven’t taken sexual harassment of their employees by outsiders into consideration.

“If someone is traveling and doing sales training or trade shows, we preemptively make clear that if you’re ever in a situation where it feels remotely uncomfortable, with someone trying to cross the line, we have you 100 percent,” Michael Topolovac, Crave co-founder and CEO tells Bustle. “Get yourself out of any unsafe situation and never even remotely feel any obligation to entertain something for the sake of closing a deal. We don’t want that business.”

At Unbound, Rodriguez says the only sexual harassment she and her mostly female team has had to deal with has come from outside the company. In one case, a man in his thirties who worked an event they were a part of hit on a 19-year-old intern. Rodriguez says that the man sent her intern multiple messages asking for a date, even after she said she wasn’t interested. When Rodriguez found out about what was going, she sat the intern down to find out what happened, made sure she was OK, and then contacted the venue herself. “I had to say, ‘This is not OK,’” Rodriguez says. “‘Please tell him to not be in contact with anyone at our company anymore. We would like a new point of contact.’”

Have you heard about the Crave Pleasure Tour? Crave is hitting the road in a 1961 Airstream, an effort to bring our popular Build-A-Vibe workshop across America! Click the link in our profile to learn more and find out how you can support our mission to encourage thoughtful and provocative conversations about sexuality and desire.

Another place where sexual harassment can be an issue is in company events or mixers that involve drinking. Rodriguez says that “90 percent” of the time sexual harassment happens, it’s not in the office but at events where alcohol blurs the lines between personal and professional. Occasionally taking alcohol out of the equation, then, is another great move that companies can make to protect their employees.

“I think, especially in startups, the drinking culture makes it so easy to blend the line between professional and personal,” Rodriguez says. “It’s really important to have company activities that don’t always center around drinking. So we do movie nights and things like that. Which sounds cheesy, but I think drinking culture directly influences levels of harassment.”

And while it might help to remove alcohol from the equation, alcohol should never be used as an excuse for harassment.

Sexual Harassment Within the Sex Industry

But what about other people and companies in the sex industry? While sex positive, feminist companies like Babeland and Good Vibrations used to be notable as exceptions to the sketchy, backroom feel of sex shops, they’ve now become the norm. However, Topolovac says, there are still some bad actors around. “Those people do exist,” Topolovac says. “They’ll pop up once in a while. But it seems like they’re a dying entity. As a brand, there are certain people who we just don’t do business with because it feels like that’s in their DNA.”

As in any industry, there are rumors about who does and doesn’t respect boundaries. Rodriguez’s policy is to have direct conversations with the people Unbound works with about anything she hears. Of the three men she’s had to do that with, two said they were completely unaware of the allegations and took steps to address the situation immediately.

It’s really easy to write someone off as someone who abuses consent. That’s one way to handle it,” Rodriguez says. “Another way is to get on the phone, have that conversation. Say, ‘These are the things that are being said about you. I don’t know if they’re true or not, but as your friend I think you should know they’re being said and I’d like to give you the opportunity to address them.”

The third man got defensive and asked her “how dare” she accuse him of crossing boundaries. That response helped her make the decision to no longer work with him and his company. “He’s reached out to me multiple times since then wanting to do different partnerships,” Rodriguez says. “I think I’ve been pretty clear: We’re not interested in working with people who behave that way.”

As a female entrepreneur, Rodriguez believes that setting boundaries is one of the most important things she can do. That’s what prompted her to return money to an investor after hearing sexual harassment allegations about someone in their portfolio.

“I think it’s up to female entrepreneurs to create consequences for bad actors,” Rodriguez says. “And it shouldn’t be — the burden shouldn’t be on women. But I’ve gotten to the point where I’m done playing mom for these guys. I’m happy to have a conversation about it. I’m happy to coach them and tell them what I think. But it’s not my job to fix them and I have no interest in doing that.”

Feminist pornographer Erika Lust agrees: One of the biggest ways to combat sexual harassment is putting women in power. “Since the first moment I created Erika Lust Films I knew by putting more women in leading roles, more women behind the cameras, on set, in pre-production, basically in positions of power, I would be able to offer a safer sex environment for performers in the industry,” Lust tells Bustle. “I can’t stress this enough and I have relentlessly expressed the importance of this: Put more women in positions of power. Absolutely everything — from what we have seen in TV shows and movies, to the way corporations are ruled — is controlled by men. If there is something valuable and important that we can take out of the #MeToo movement, it is that men in power create a climate of serial sexual predatory behavior that we must confront.”

Both Crave and Unbound are companies where sex is talked about constantly and openly, every day. Sex and sexuality are central to what they do and promoting positive attitudes about them is a major part of their missions. That approach to sex — that it’s a normal, natural part of human life — is part of the reason they’ve been successful in combatting sexual harassment. If you take away the “forbidden” and “dirty” corners of human sexuality, it’s a lot easier to stand in the light.

But another reason they’re doing better than corporation after businessman after politician in the news is the fact that they’re run by people who have themselves experienced sexual harassment. Both Rodriguez and Chang know what it is to be on the receiving end of abuse. They know what it feels like to feel unsafe in their own spaces and they’ve committed to creating environments where that never happens again.

Non-sex industry leaders can learn valuable lessons from those in the sex industry: Set clear boundaries, put complaint procedures in place, and back up your employees, even when they’re not in your office. Because if companies that spend all day talking about vibrators and the female orgasm protect their employees from sexual harassment, why can’t everyone else?