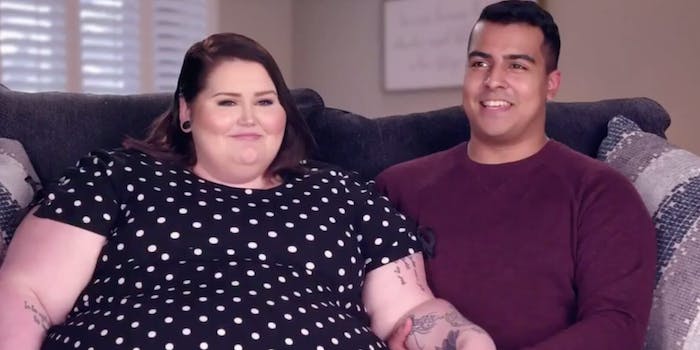 TLC accused of fatphobia, fetishization with show about ‘mixed-weight’ couples

'I wouldn’t mind if she was a little bit bigger,' a man says in the preview for 'Hot and Heavy.'

TLC announced a new show that aims to highlight stories of couples in what it dubs “mixed-weight relationships.”

The two-minute-long trailer for Hot and Heavy, released on Tuesday, shows a woman saying, “My mom told me that it’d be difficult to find love if I was heavy.”

Another woman says she feels she “hit the jackpot” by finding her partner.

“I always had this idea that I didn’t deserve love because of what I looked like,” another woman says.

For these couples, love knows no size. See the highs and lows of their mixed-weight relationships on the series premiere of #HotandHeavy Tuesday, January 7 at 10/9c. pic.twitter.com/QAFh8AILj7

The trailer then shows the women’s partners, who all comment on how happy and attracted they are to the women.

“I wouldn’t mind if she was a little bit bigger,” a man says.

Another man exclaims that “every inch is a joy.”

The show immediately received backlash on Twitter, with TLC being accused of fatphobia and fetishization.

“What tf is this, @TLC? Creating a show about fat people in relationships, as if it’s surprising that anyone would love a fat woman. And not to mention the slight air of fat fetishization, it’s gross,” Twitter user @SimoneMariposa wrote.

Trying to find the words to describe how exploitative and fat misic TLC is. There is an obsession with the way they portray fat people under the guise of “harmless entertainment showing real lives” and it borders on fetishization. https://t.co/IOS9DHrpFM

If there’s a worse idea for a reality TV show, I’d like to hear it. pic.twitter.com/7chIhIs90I

Another criticized the comments the men made in the clip.

“‘I wouldn’t mind if she was a little bit bigger’ ehhhhh sounds like a fetish to me,” Twitter user @myabrianne_21 wrote.

Others pointed out how all of the couples shown in the preview are plus-size women with slim men, rather than the other way around.

So will there be a couple the other way around him big her not just curious? #hotandheavy

According to Deadline, Hot and Heavy is set to premiere in January. The series will comprise of three hour-long episodes, each showing a different couple’s story.