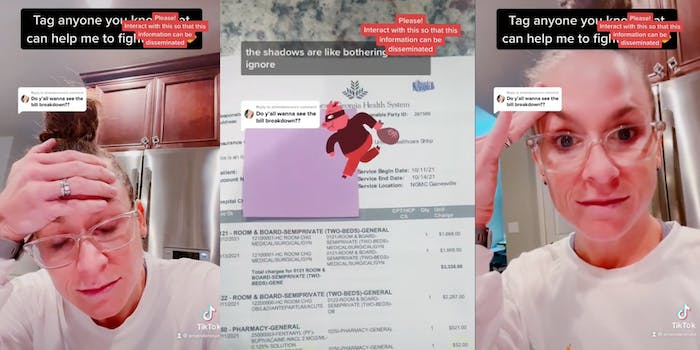 ‘I’m not paying it’: Woman outlines how a hospital charged her almost $4,000 for Tylenol

She goes on to explain the best way to fight outrageous medical bills.

A TikTok user says she was charged nearly $4,000 for common pain medication after having a C-section performed at a local hospital.

In a video uploaded this week, TikTok user AmandersRuns, who duets another video regarding the cost of U.S. healthcare, outlines the outrageous cost for just acetaminophen.

The TikToker also went on to accuse the hospital of being in violation of rules regarding price transparency, which requires all hospital in the U.S. to make public online a list of their standard charges.

The video has since been viewed nearly 70,000 times. In a follow-up clip breaking down her itemized bill, AmandersRuns detailed the cost of her visit to some of her skeptical followers.

AmandersRuns begins by noting that her costs came despite having so-called “good” health insurance as a public educator.

The bill clearly shows each dose of acetaminophen (commonly sold over-the-counter as Tylenol), which were delivered intravenously, coming in at $905.00. Clarifying previous videos, the TikToker notes that the exact cost came out to $3,620.

After searching online, AmandersRuns said that she found that 24 doses of the medication was sold for $829.99. Each dose should therefore theoretically come out to $34.58, not including likely costs for delivering the medication.

The TikToker also says she was charged well over $9,000 on pharmacy charges as well. In total, AmandersRuns’ bill indicates that the entire hospital visit ended up costing $47,091.01. With insurance covering the majority of the bill, AmandersRuns says her total out-of-pocket cost will be around $5,000.

But even with the lowered cost, the TikToker says her goal is to fight against the highly inflated prices.

The TikToker added that she has only paid $5 to keep the bill from going to collections while she fights the cost.

“I refuse,” she noted. “I refuse to pay such inflated prices.”

The Daily Dot was unable to reach AmandersRuns for comment. The TikToker’s latest video breaks down how anyone can challenge the cost of their healthcare bills by using a range of services and websites.

Yet while the instructions may be helpful for now for those with and without health insurance, many feel the entire U.S. healthcare system needs a complete overhaul.