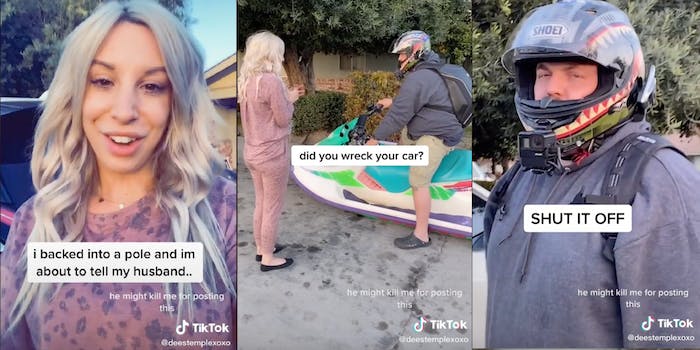 'Knowing nothing about this woman and based on this video alone I do fear for her safety.'

Commenters expressed concern for a TikToker’s safety after she posted a video Sunday of her husband reacting to her dented car and wrote “he might kill me for posting this.” The TikToker says her videos are just for “fun.”

Deanna Stemple, whose TikTok username is @deestemplexoxo, has over 39,000 followers on the app and posts videos with her husband, Nick Stemple.

In the video, Deanna says she “backed into a pole” and wants to record her husband’s reaction. She says she called her husband and told him to come home from work. As she’s explaining the situation, the video shows Nick driving down the street on a motorcycle modified with the body of a water scooter. In other words, he’s driving a Sea-Doo on land.

Deanna approaches her husband, who is sitting on the water scooter, and says, “You know how you said you love me?” A moment passes before Nick asks, “Did you wreck your car?”

Deanna then leads Nick to her vehicle and holds her hands together as she says, “I backed into a pole.” The two stand behind the car quietly before Nick turns to the camera and says, “Shut it off.”

For many commenters, Nick’s vehicle became the focal point. Users joked and asked questions about his Sea-Doo, with one individual calling it a “boatercycle.” WTAJ-TV reported on his custom-made “Scootski” in 2019.

“I couldn’t take this serious when I saw the jetski,” one user wrote. Another asked, “What was he doing?! chasing dolphins in the freeway?”

Still, users were struck by the couple’s dynamic in the video. One person questioned why Deanna has “to answer to” Nick.

“Why do we treat husbands like our parents,” another individual commented. “He is your equal. Why are you cowering?” Deanna responded, “It’s not called cowering. it’s called respect. If he hit something, he would tell me as well.”

One Twitter commenter said that they are concerned for Stemple and wrote, “Knowing nothing about this woman and based on this video alone I do fear for her safety.”

Another wrote, “Why does she engage with her husband like he’s her dad and she’s a 10-year-old?”

The newlyweds often make videos together, including ones where they “prank” each other. In one video, Stemple throws her husband’s wedding ring in their pool, and he pushes her into the water.

“This is what happens when I try and win,” she says. “Guys, there will be a day when I beat this man.”

Deanna, who did not immediately respond to the Daily Dot’s request for comment, wrote in her TikTok bio, “We just like to have fun.”