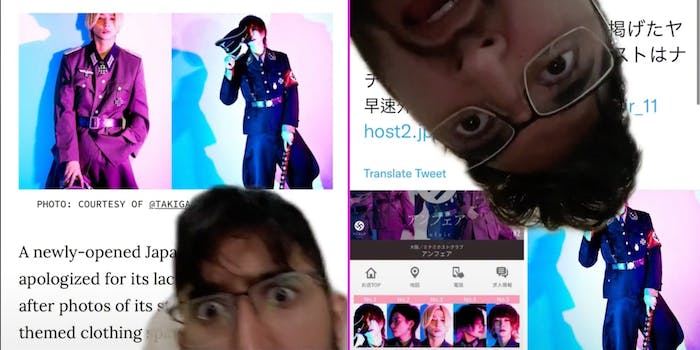 A Japanese nightclub has come under fire on TikTok for advertising its employees in Nazi military uniforms.

Host clubs are establishments in Japan where male staff pour drinks and wait on patrons. A few weeks ago, a Reddit user spotted a bus advertisement for a new club in Osaka using a Nazi symbol.

The nightclub, Unfair, subsequently posted images of employees dressed in full Nazi regalia with hauntingly accurate details down to SS bolts on the collar, the Nazi Eagle on the caps, and red swastika armbands.

Images also appear to show champagne bottles inside the club decorated with swastikas.

The nightclub’s website has been taken down and its parent company, Host x Host, issued a statement apologizing for its “lack of knowledge and awareness.”

Tiktok user @the_kamoka posted a now-viral video that includes a screenshot of the Vice News report on the controversy. The TikToker initially found the article on Facebook and was so stunned that he wanted to share the story with others on TikTok.

He chose the sound “JoJo Pose” by Apollo Fresh, where the singer repeats the word “pose” over and over, to “heighten the irony” of the nightclub casually treating these uniforms as a fashion statement. The video now has 1.5 million views.

“There’s just a wild variation of people commenting,” the TikToker told the Daily Dot of the video. He said there are some users trading in dark humor and others “having discussions about…‘Who’s to blame? Is it the people at the host club, is it general government or education in Japan?’”

User @makarooni_n_chez wrote, ”What you mean lack of awareness…they were apart of the axis powers…the reason why we have awareness…”

But @the_kamoka said it’s hard to understand the nightclub’s thinking. “How long do you have to research Nazis before you find out what Nazis did? It’s not like it’s unknown information,” he said.

User @rivetkick agreed, commenting, “Even if they erased it through school curriculum. You have to search for the the outfits. You’re telling me they closed their eyes and it appeared?”

Around the time the video hit 700,000 views, @the_kamoka said the original video and a duet he made reacting to two comments were taken down by TikTok. TikTok offered no reason for the removal beyond that it was a “content violation.”

The original video has been restored, but @the_kamoka is still banned from posting. The situation is frustrating, he said, because he was planning to make a roundup of the most shocking comments the video has received.

Unfair and its parent company, Host x Host, did not respond to the Daily Dot’s requests for comment via Twitter.