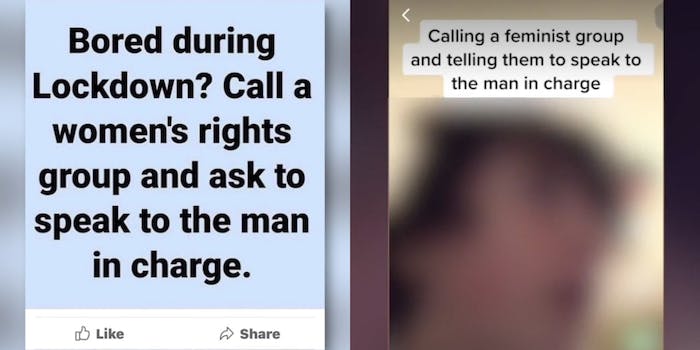 TikTok users ask for ‘man in charge’ at women’s center

A social media “challenge” that took off on TikTok over the weekend caused trouble for at least one women’s shelter. As part of the trend, users called “feminist numbers,” including domestic abuse hotlines, and asked to speak to “the man in charge,” Patch reports.

The Women’s Center in Waukesha, Wisconsin, was one of the centers targeted by prank callers, according to WITI-TV. The center provides shelter and support to victims of domestic abuse, sexual abuse, and human trafficking.

Angela Mancuso, executive director of the Women’s Center, told local news outlets that the TikTok prank was not as harmless as it might seem and could even cost someone their life. “There is a lack of understanding that what they (social media app users) are doing is much bigger than getting a few laughs,” Mancuso said.

She added that the people calling, not just women, are often deeply traumatized and it takes a lot for them to call. “That is what eats at me. If someone can’t get through right away, they may not call back,” Mancuso told Patch.

At first, the center wrote off the prank calls. But then calls came in by the hundreds and tied up the phone lines, taking opportunity away from people actually seeking help.

Mancuso also said that the prank callers posed as assault survivors. “People are now calling and describing rape in graphic detail and using misogynist and transphobic slurs,” Mancuso said. “So this is literal harassment now.”

The center said when Wisconsin’s stay-at-home order was announced in May, there was a “decrease in calls to the Women’s Center but an increase in lethality/danger assessment calls,” according to Patch.

“In a time when victims are at high risk and an opportunity to reach out is essential, these pranks are especially threatening to the center’s work,” Mancuso said.

By Monday afternoon, it appeared that any TikTok videos promoting the “man in charge” challenge had been removed. TikTok’s safety guidelines prohibit impersonating a person or organization “in a confusing or deceptive manner.”

“We are committed to promoting a safe and positive app environment for our users,” TikTok told the Daily Dot in a statement. “Our Community Guidelines outline behavior that is not acceptable on the platform, and we take action against behavior that violates those policies, including by removing content or accounts.”

The Women’s Center did not immediately respond to the Daily Dot’s request for comment.