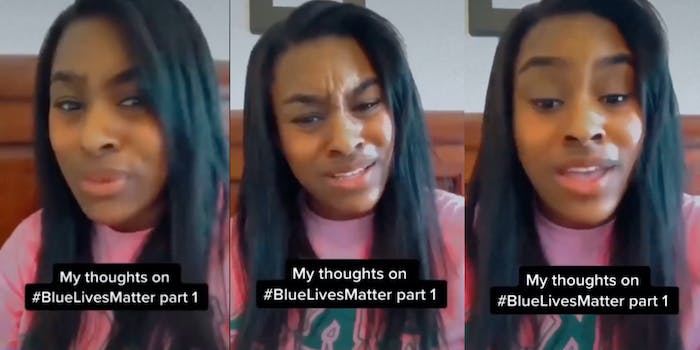 ‘If you feel that there’s nothing wrong with saying Blue Lives Matter, you’re privileged.’

Gabrielle Pettway, who is a teacher and the daughter of Jefferson County Sheriff Mark Pettway, vocalized her opinions on Blue Lives Matter in a since-deleted video.

“I’m not gonna sit up here and say ‘Blue Lives Matter’ because it’s undermining the racism and corruption built into the whole blue system,” she says in the video.

She then addresses people who have ties to the law enforcement community.

“If your boyfriend is a cop, I don’t want to hear you saying ‘Blue Lives Matter. What I want to see though is what you’re doing to hold him accountable? What kind of conversations are y’all having with your brothers, dads, moms, who’s ever in law enforcement to hold them accountable and making sure they’re a part of the solution and not the problem,” she continues.

Pettway mentions that because her father is the first Black sheriff in Jefferson County, her family has been subjected to death threats. Pettway says that she is also aware police officers put their lives on the line daily.

“But Black people are risking their lives just by being Black,” she says. “Given the choice, I would choose that again but I wouldn’t choose oppression, too. Why does that have to come with being Black?”

Her comments have been controversial among the law enforcement community. A former investigator with the sheriff’s office in Jefferson County, David McAnally, told a local news station, “To me, it’s just really disappointing that a daughter would say that when her dad has walked the streets, and faced the danger, and depended on his big brothers to support him and back him up.”