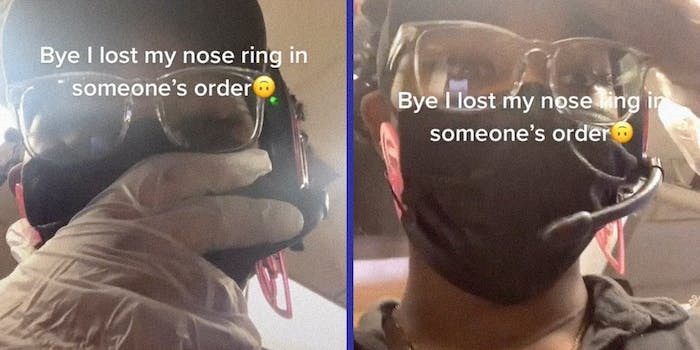 ‘Y’all they are gonna fire me’: TikToker says she lost nose piercing in Jack in the Box food

A video of a Jack in the Box employee discovering she lost her $500 nose piercing in someone’s food order is getting wild reactions on TikTok.

“Just waiting on someone to call and complain,” says Tashi, @tashbrattt, in the video caption. “Y’all they gonna fire me. I just know it.”

The video has more than 20.1 million views and 5 million likes. After commenters demanded to know if the employee was fired or if the nose piercing was found, the story evolved into a six-part TikTok series.

Tashi shares that while working, she was ripping off her face mask out of frustration because one of her employees didn’t stock a needed item. Tashi also says she sometimes doesn’t wear a mask while working the fryer due to the “suffocating” heat. In one video, she holds up a black mask and says her nose piercing often gets caught on it.

Tashi discovers her piercing is missing in the restroom. After looking all over the store with the help of employees, Tashi still can’t find her piercing.

Tashi had packaged Uber orders that day and wonders if her expensive diamond stud was in a bag she had already packaged and sent off.

Some people online criticized Tashi for not wearing a mask while working in the food industry.

Tashi says she was fully vaccinated and that the store was empty at the time. “You stand next to a fryer with your mask on the whole time, no windows to exchange air or anything,” she replied. “Just suffocating.”

Other people online said they couldn’t wait for the other TikTok to come out from the person who found her nose piercing.

“POV: you saw the other vid,” one user commented.

People on TikTok took advantage of the viral story and pretended to be the one to find Tashi’s nose piercing.

Micky, @mickyxsigns, made a video holding a nose ring in her hand and mirrored Tashi’s video caption.

“BYE, I just found a nose ring in my fast food order,” the video caption says.

After putting the nose ring on, Micky thought it would be obvious that it was a joke but made a follow-up video explaining that her video was fake.

“The other girl lost a really expensive stud and I showed my cheap $10 hoop,” she says in the video.

Others online also make fun of the situation by tagging Jack in the Box in the comment, to which Tashi replied, “Don’t be a snitch.”

While the nose piercing has yet to be found, this story has a happy ending. Despite getting written up by her manager for the incident, Tashi woke up to a text from her manager that she was being promoted.

“Looking at the youngest lead,” the video captions.

Tashi did not immediately respond to the Daily Dot’s request for comment.