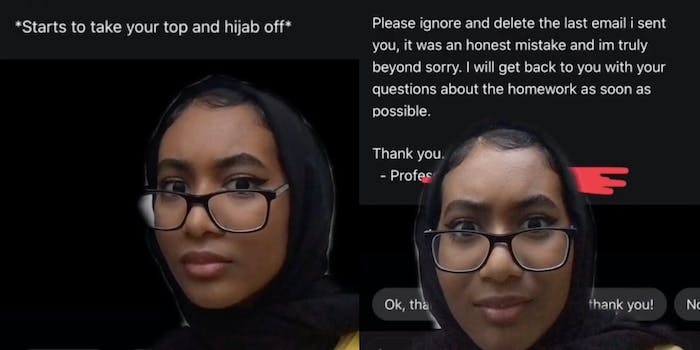 'She can get her entire tuition paid for with one email.'

Update 12:35pm CT, Nov. 11: The original viral TikTok has been deleted, and the user behind the viral TikTok explained in a separate post that she made up the story and intended it to just be a joke.

We’ve all had awkward conversations with our professors, but few can compare to TikTok user @cloudoda‘s recent experience.

The young user shared her experience to TikTok earlier this week, where it quickly garnered attention from other users. A simple video shows @cloudoda, a college-aged woman who wears a hijab in all of her videos, using the greenscreen effect. Behind her, the awkward email exchange unfurls.

The initial email appears to have come from @cloudoda herself, likely inquiring about a past homework assignment. The subject for the email reads “regarding homework due on the 18/9.”

Any questions @cloudoda may have had are likely far from viewers minds, as the body of the email appears behind her. The email simply reads “*starts to take your top and hijab off*,” with no salutation or additional text. In the TikTok, @cloudoda sits in front of the text, which is displayed on a dark background, with anxiety and concern clear on her face.

A second email soon follows, again from the unnamed professor. “Please ignore and delete the last email I sent you,” it begins. “It was an honest mistake and I’m truly beyond sorry. I will get back to you with your questions about the homework as soon as possible.”

In the background of the clip, audio from @johnymercury plays the sound of women chanting in Spanish. The caption for the clip merely reads “HELP.”

In the comment section for @cloudoda’s post, jokes about bribery and blackmail run rampant. “You have SO much power rn its unreal,” one user wrote. Other users agreed, some even sending advice on what her demands should be. “Chile… you realise you can now have ANYTHING you want… Grades, money, cheese on toast. The world is yours and I’m cackling.”

Sentiments like “she can get her entire tuition paid for with one email,” and “GET THE A+ AND A RECOMMENDATION LETTER GIRLL,” peppered nearly every response to the video. Many users recommended that @cloudoda “get that A+” and then sue.

Some users pushed back at the idea that the professor had done anything wrong, but were soundly educated by their fellow commenters. People pointed out the specificity of the inappropriate email as apparent proof that it was intentionally sent to @cloudoda, rather than an email intended for someone else accidentally fired off to the wrong recipient.

Thankfully, the experience doesn’t appear to have scarred @cloudoda too much. Since the incident, she has uploaded several new videos. They return to her typical upload style, rather than revisiting the professor story. In the comments for these posts, several users pleaded with @cloudoda to upload part 2 of the professor exchange with further information. Thus far, at least, she doesn’t appear to have any intention of doing so.

The Daily Dot reached out to @cloudoda.