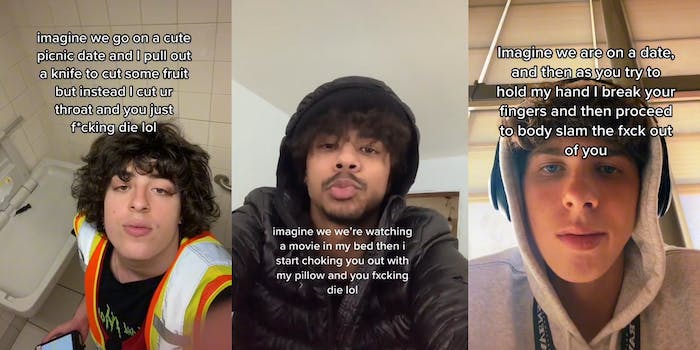 'Imagine being a woman and seeing all of these men fantasize about the ways they'd graphically kill you.'

Warning: This article contains descriptions of fantasies of violence against women.

TikTok users are calling out a trend in which creators fantasize about dates that turn violent. Critics say the imaginary date trend violates TikTok’s terms of service and promotes domestic violence against women.

“Imagine we go on a cute picnic date and I pull out a knife to cut some fruit,” reads the overlay text in a video from @its.dannyphantom444. “But instead I cut ur throat and you just f*cking die lol.”

Ratliff used the phrasing from the trend to make her observation about it: “Imagine being a woman and seeing all of these men fantasize about the ways they’d graphically kill you.”

In a TikTok direct message to the Daily Dot, Ratliff said that while she understood that the TikTok trend was mostly motivated by “boys looking for clout,” she was still “really disturbed” by the videos, especially those that were extra descriptive.

“Being killed on dates is something women actually have to be fearful of,” she said. “I also believe that there is truth behind every joke you tell.”

According to UN Women, a third of women worldwide have experienced physical or sexual intimate partner violence, or violence that was perpetrated by someone that a woman is or was involved with.

TikToker @aidenthegrollman posted a video that said, “Imagine we are on a date and then as your try to hold my hand I break your fingers and then proceed to body slam the fxck out of you.” The user told the Daily Dot that the trend is a “joke” via Instagram direct message.

User Eli Gibson created a now-deleted TikTok video in which he said, “Imagine we go to Topgolf and I miss every shot and your beating me by 30 so I take a driver and beat tf outta you and shove a 9 iron down your throat.” He also said that his video was joke.

“I never meant any disrespect by it,” Gibson told the Daily Dot in an Instagram direct message. “I literally just copied another [TikTok.]”

Gibson also insists that his video is not about women. “I do not promote abuse against woman,” Gibson told the Daily Dot.

(The Daily Dot was able to reach out to seven of the creators, either via email, Instagram direct message, or TikTok comment. One of the creators declined to comment.)

Audrey Bleu, a Twitch streamer and TikToker, said that she was “graphically appalled” when she saw videos describing fantasy violence against women on her For You Page.

“None of this is a joke. None of this is funny,” Bleu told the Daily Dot in a phone interview. “As a woman, I’ve experienced a lot of harassment on dates. It’s a fear we actually have to worry about, you know, violence. Especially after rejecting a man.”

Bleu said that she reported 24 TikTok accounts that posted videos in line with the trend for “graphic violence” and “hate speech”—two categories of content that are reportable on the app. She said all the videos she reported were not deemed by TikTok to be a violation of the app’s content guidelines, which were updated earlier this month.

(As reported by Newsweek, TikTok’s updated content guidelines state that “content that can cause discomfort, shock or disgust to viewers” may now be “ineligible” to be on user’s For Your Pages.)

“TikTok has a responsibility as a platform to keep this stuff like off of its platform especially since their latest update they claim to be all about protecting marginalized voices and removing hate speech from their platform,” Bleu told the Daily Dot. “But one of the first trends that happens after that big update is a trend talking about violence against women. And TikTok doesn’t care.”

Update 11:50am CT, March 25: In an emailed statement to the Daily Dot, a TikTok spokesperson said that “misogyny has no place” on the platform.

“Content that promotes hateful behavior and violence against women goes against everything we stand for as a safe and inclusive platform and will be removed,” the spokesperson said.