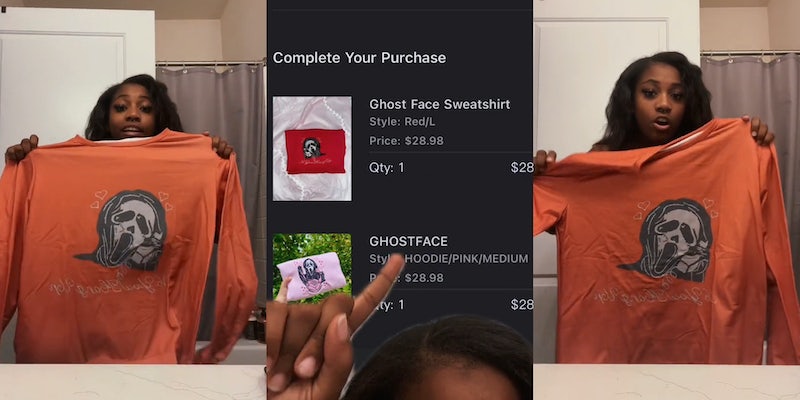 ‘I’m never buying from an ad on TikTok again’: Woman slams hoodie brand that scammed her

TikTok is filled with deceptive ads.

Ads on TikTok are often deceptive, and users are sharing their stories of getting duped—or getting a dupe—on the platform.

One recent example comes from TikToker Moriah (@okaymoriah), who has more than 111,000 followers. In a TikTok posted last week, she says she’d been seeing the same ad for a Ghostface hoodie from “Joycelike,” a brand that appears to no longer have a live website. Moriah says she made an “impulse decision” and bought a sweatshirt and a hoodie from the company in early October.

😐 DO NOT ORDER JOYCELIKE “HOODIES”

She then shows what she received in the mail, weeks later: an orange sweatshirt that was shown online as red, and a hoodie with no hood. Both are made with cheap, thin materials.

“You should have went to Etsy that’s probably where they stole the pictures from,” reads one comment. The “No you hang up” Scream sweatshirts Moriah had ordered are sold on Amazon, Etsy, and Redbubble.

There are multiple videos on TikTok warning people of other scammy retailers selling hoodies; Four Cali, Kezihome, Mikidely, and Zedlia have all been called out as scammers on Instagram and TikTok, with customers either never receiving their purchase or receiving low-quality versions of it. A TikTok search for Joycelike doesn’t bring up any accounts. A Google search for “Joycelike reviews” brings up the site Scam Adviser, which says the site is likely a scam.

@jessvalortiz Please be careful before making your online purchases!!! This is $70 I will never get back! 😭 #fyp ♬ morgen meditation – guidet meditation – Lisbett Wedendahl / LIFT YOUR MIND

There are also accusations that some of these stores are stealing other artists’ work, and TikTok in particular has had issues with creators’ videos being used to sell bunk products without their consent. Some scammers are even posing as major brands.