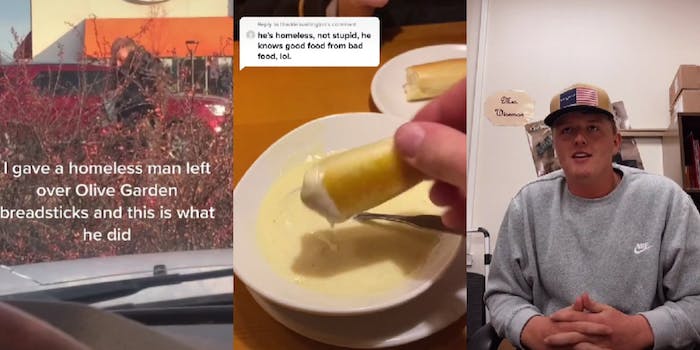 ‘That’s a human being, not your little pet’: TikToker films houseless man after giving him breadsticks, sparks debate

'Why are you filming him?'

A video of an anonymous man eating breadsticks is blowing up on TikTok this week, sparking a debate about “performative activism” and how unhoused people are depicted on social media.

In the original clip, TikToker @dalton_j_puckett writes, “I gave a homeless man left over Olive Garden breadsticks and this is what he did.”

Viewed more than 9.7 million times, the video shows a man taking a bite out of a breadstick and then throwing it away.

Commenters were quick to criticize the video’s negative tone, pointing out that it wasn’t @dalton_j_puckett’s business what this man did with his breadsticks.

“Homeless people aren’t obligated to eat leftovers,” reads one of the top comments.

“I gave a human my scrap food. How dare he not enjoy it,” reads another sarcastic comment. Many people saw this as a perfect example of how unhoused people are dehumanized in the media.

In the words of TikToker @mikeshardcanada: “You didn’t know the reaction he was gonna have. Why were you filming him? Why did you give a homeless man food, go to your car, and then secretly film him like a freak? That’s a human being, not your little pet.”

@dalton_j_puckett has posted a couple of responses to the backlash, one of which is a clip of himself eating Olive Garden breadsticks to debunk a comment saying they’re “bad food.”

The other is a longer account of what happened before and after the original video, including a conversation he had with the homeless man. Here, Puckett explains that he started filming the man after noticing that he was throwing the breadsticks and acting erratically.

“It wasn’t I wanted to record my good dead, no. It was because he was throwing them at cars,” the TikToker said, adding: “It’s funny to see everybody’s comments when they don’t know the whole backstory.”

The Daily Dot reached out to @dalton_j_puckett for comment via DM and TikTok comment, but did not immediately hear back.