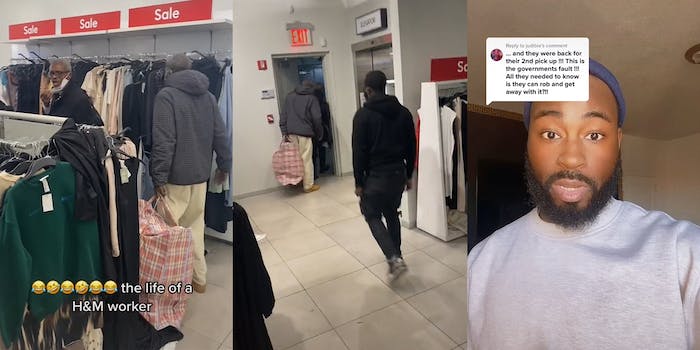 ‘If the company don’t care, why should you?’: H&M worker goes after alleged shoplifters in viral TikTok

'I would never be fighting anyone over stolen goods.'

A TikTok showing H&M employees going after alleged shoplifters attempting to leave with stolen clothes has gone viral and sparked discussion in the process.

The TikTok, which was posted by @king.nix_ over the weekend, by Tuesday had almost 20,000 likes and over 1,000 comments.

“These are the ones that came to H&M earlier today,” a person says behind the camera. “The cops are on their way.” The video is captioned, “the life of an H&M worker.” The person filming follows the men into a stairwell, and a scuffle ensues.

While this may seem like a cut-and-dry case of shoplifters being persecuted for their shoplifting, commenters on TikTok were divided over both shoplifting and the act of pursuing the shoplifters.

“These people are willing to put their lives on the line for these companies,” said one user, referring to the employees’ decision to pursue the shoplifters.

“I would never be fighting anyone over stolen goods,” remarked another. “These corporations make millions a day.”

Others were quick to blame the greater economic and policing situation in the United States.

“And they were back for their 2nd pick up !!! This is the governments fault !!! All they needed to know is they can rob and get away with it?!!” exclaimed one commenter.

This latter comment inspired a response from @king.nix_. In a two minute response TikTok, @king.nix_ elaborated on the situation.

The TikToker says that the people shown in the video were serial shoplifters. “Almost every day they would come to the store and take because we do nothing,” he says in the video. “We mind our business because we’re not supposed to go after them.”

After this instance, he says, employees were fed up and decided to break protocol.

This explanation did little to assuage TikTok commenters.

“If the company don’t care, why should you?” asked a commenter.

“So what!!!!” wrote another. “You still gone get paid the same amount. It ain’t worth getting hurt. What if they pull out something on yu? Is it worth it?”

@king.nix_ has since posted several additional follow-ups, telling commenters to “chill” and explaining that the video happened two months ago.

“It’s not that serious,” he says in one follow-up. “Nobody lost their jobs. Everyone still works there.”

As one commenter noted, “You not the CEO—don’t get killed fighting over the company stuff.”

The Daily Dot reached out to @king.nix_ via TikTok comment and to H&M via email.

Update 12:21am CT, Feb. 24: In an emailed statement to the Daily Dot, an H&M spokesperson said the company was investigating the incident.

“The health and safety of our customers and employees is our top priority,” the spokesperson said.