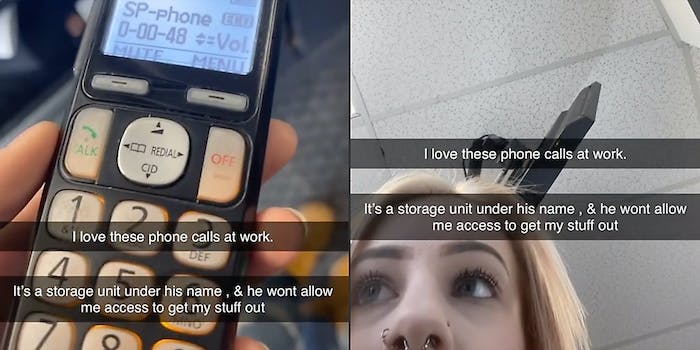 ‘He honestly put me through hell’: Viral TikToks show the everyday realities of domestic abuse

One video shows a phone call with the woman's ex.

In a TikTok posted this week by Natalia Moore, 20, she records a phone call she says she received at work from her allegedly abusive ex-boyfriend. What at first seems to be a logistical conversation quickly turns into her ex-boyfriend yelling at her about paying for a storage unit and insulting her appearance.

“Pay the fucking unit today or Ryan’s gonna be dead,” her ex-boyfriend says. Moore told the Daily Dot in an Instagram direct message that Ryan is her 16-year-old brother. “No one gives a fuck about you Natalia. You weigh 80 pounds, you’re disgusting.”

In an email to the Daily Dot, Moore said that she lost 35 pounds while in the relationship with her ex due to stress.

In the video’s overlay text, Moore has written that the storage unit is under his name and that he hasn’t let her retrieve her belongings that are still inside.

Moore posted a series of other videos of her ex-boyfriend appearing to threaten and verbally abuse her. SHe also answered questions about their relationship. Moore told the Daily Dot in an Instagram message that her ex verbally, physically, financially, and emotionally abused her. She said she left him “about a month ago” after two years together, on and off.

“Every time I’d escape, I’d always go back,” she said of their relationship in an Instagram direct message.

Another TikTok captures Moore’s ex-boyfriend saying that he will “beat [her] up,” stab, and kill her with a knife. She also posted photos of multiple bruises on her body. In an email to the Daily Dot, Moore said that her ex-boyfriend punched, kicked, and choked her and threw her to the ground.

“I had constant fear everyday that one day, maybe I won’t wake back up again,” she wrote. “One day, I’m gonna lose my life because his strength overpowered me, to the point I couldn’t even defend myself.”

In a follow-up video regarding his phone call about the storage unit, Moore says that her ex bought the unit to keep his car, a Miata. She told the Daily Dot that she stored some of her belongings in the unit, as well.

“Since we broke up, I’ve been trying to go in and get all my stuff out of there because he threatens, ‘Oh, I’m not gonna pay the storage unit and all your stuff’s gonna go back,'” she said in the follow-up TikTok. “I’ve been asking to get my stuff out for literally weeks.”

Moore also said that after paying for her boyfriend’s lifestyle during their relationship, he has made an attempt to pay her back. However, Moore says he told her that the fee for the storage unit was something he would take care of.

In an Instagram direct message to the Daily Dot, Moore said that her ex isolated her from her family and loved ones while they were together and relied on her financially.

“I ended up w a lot of credit card debt, my car almost got repoed because of him, and I’d struggle every week to pay my bills,” she told the Daily Dot. “I was living paycheck to paycheck because he’d refuse to get a job to help me.”

Moore also said that there is an ongoing court case between the two of them and that her ex has broken his “criminal bail condition” by continuing to contact her.

Moore said that she posted her initial video showing their phone call “to show everyone the person he really is.”

“Unfortunately I’m not the first female this has happened [to],” Moore said. “He honestly put me through hell.”

She told the Daily Dot that she wants victims of domestic violence to know that they’re not alone and “there is a way out.”

“They always promise they will change, it never ever, gets better. No matter what you do,” she wrote in an email. “It may seem like the end of the world to lose that person, but I promise you, your life is worth it.”

Update 10:21am CT, Jan. 14: In an email to the Daily Dot, the Laconia Police Department confirmed Moore filed a police report but that an arrest had not been made. The department said it could not release any more details about the open investigation.