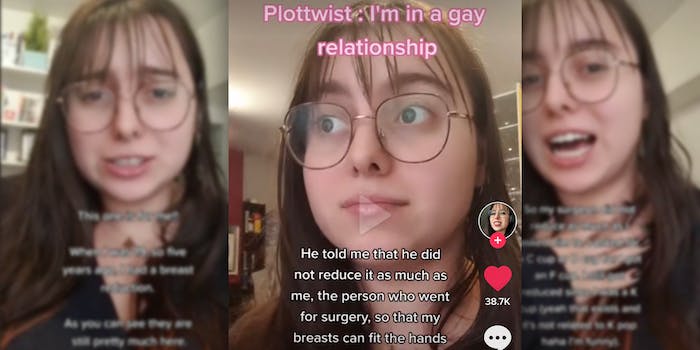 After a woman shared her breast reduction horror story, her fellow TikTokers have convinced her to look into filing a lawsuit five years later.

TikToker @delenda_est_, aka Cam, made a video responding to a call for people to share “the most sexist thing a man has ever said to them.” She shared her experience on Wednesday—to the horror of many women on TikTok.

Cam said when she was 19, she wanted to reduce her breast size from K to a B or C. According to Cam, her surgeon ignored her request and left her with an F cup so that, he said, her breasts would “fit in the hands of an honest man.”

The biggest plot twist, Cam said, is that she’s now in a gay relationship. Although the surgery helped with Cam’s back pain, she said she is seeking a further reduction from a different doctor. Her video now has over 460,000 views.

Commenters expressed outraged and questioned why she didn’t pursue a lawsuit. Cam responded that she didn’t feel she had the power to pursue legal action at the time of the surgery.

In one video, she said she was using the TikTok comments “as fuel” and contacting lawyers for information about what it would take to sue the surgeon.

In a video posted on Friday, Cam explained that the surgery happened in Lebanon. She said she contacted other doctors about the situation but that it might be difficult to find a doctor to support her.

“Suing the guy might not be doable because I might just not find a doctor in Lebanon willing to defend what happened, like defend me, and write a report saying that there was an issue with malpractice,” she explained.

In the same video, Cam put out a call to fellow TikTokers for names and tips on feminist organizations or doctors willing to help in Lebanon.