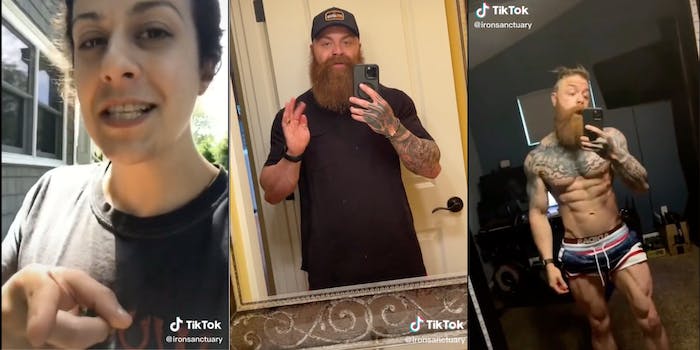 ‘You think I f*cking care?’: TikTok bodybuilder claims double standard after woman comments on his appearance

He blasted her to his 6 million followers.

In a now-viral TikTok, bodybuilding influencer Kevin Clevenger blasts a woman with millions fewer followers for commenting on his body in a before-and-after video.

In a TikTok that sparked the controversy, Clevenger (@ironsanctuary) shows a video in which he stands in front of a mirror looking one way (normal dad bod) and then cuts to a video in which his body is significantly more muscular.

A woman (@healthyalternativemom) then appears in her own video and says, “This is a perfect example to me of female gaze versus male gaze. Technically, what the female finds attractive is in the first picture.”

Clevenger, who has 6 million followers, cuts off her video and films himself discussing her reaction to his before-and-after. “This is a perfect example of how about we keep our thoughts to ourselves,” he says. “What if, maybe, I did that not because I wanted you or anyone else to find me more attractive.”

He says he posted the video because he liked the way he looked and is training for a bodybuilding competition. “You think I fucking care what other women think about my body?” he says.

He insists it would be misogynistic if he made a similar comment about a woman’s body.

“Here’s a thought: Maybe let’s stop using other peoples’ bodies as an example to say this is what’s attractive and this is what’s not,” he says. “Do better.”

In her original stitch TikTok, private as of Friday morning, the woman shows Clevenger’s before and after and then discusses her thoughts on the video:

“Don’t get me wrong, that gentleman looks great both ways, right? He looks like he worked really hard to get his body the way he wanted it and you know, no disrespect to him, he looks ‘chef’s kiss. ‘

“But technically, what the female finds attractive is in the first picture: solid, strong man, strength that looks like he could provide for you, and he’s not just looking at himself as the center of attention.”

Clevenger’s quilt video, posted on July 2, has 5.8 million views and 1.4 million likes. On Reddit, people voted 97-8 that it was “Chad,” not “cringe,” meme lingo that means Clevenger passed the test of acceptable masculinity.

But on TikTok, people had mixed opinions about Clevenger’s video. Some supported him; others sided with the woman.

“End of the day, you did this for YOURSELF & you did AWESOME! She can take her comment elsewhere,” @fleckerfitness wrote.

“Am I the only one that thinks she wasn’t trying to be disrespectful, if you watch the whole video it seems like she was trying to explain something,” said @lea901992.

On @alternativehealthymom’s TikTok, commenters defended her stance. She has 8,631 followers and restricted comments on the video.

“That guys a tool and took this WAY out of context. And so many people jump on with him without even seeing your stitched video,” said @dyeinglightcreations.

“He was literally pissed that guys were making fun of him so used me as a scapegoat. A nice man made a video defending me. So out of line,” the creator responded.

She also wrote in the comments, “Genuinely sorry he took this the wrong way … He butchered my video… Nothing to do with you, sir.”

The Daily Dot reached out to both TikTokers for comment.