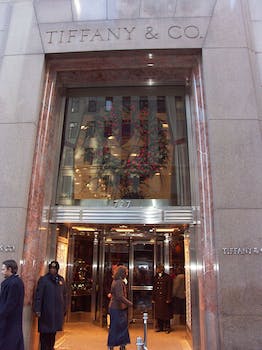 Photo via Tom in NYC/WikiMedia Commons

No boyfriend shall be stopped from spending $1,200 on diamond earrings.

Since Donald Trump was elected president, a barricaded block on Manhattan’s Fifth Avenue near Trump Tower has become a designated pen for protesters shouting “Not my president” on any given day. While good for democracy, this has not been good for all the nearby high-end businesses, especially during the holiday season.

Tiffany & Co., in an attempt to uphold the time-honored tradition of luring clueless boyfriends to buy $1,200 earrings that their girlfriends will never wear, came up with a solution, however: Why not partner with the NYPD and gussy up those barricades?

Women’s Wear Daily reports that Tiffany’s was going to use the branded blue covers for its holiday windows, but didn’t due to safety reasons. Now those covers have been repurposed and are NYPD-approved.

“Tiffany is in frequent communication with the New York Police Department and U.S. Secret Service regarding safety and security along the perimeter of our Fifth Avenue flagship,” the company said in a statement to WWD.

New York City: Where police, corporations paying $25 million in rent, and “This pussy has claws” protesters can sometimes find a way to coexist.